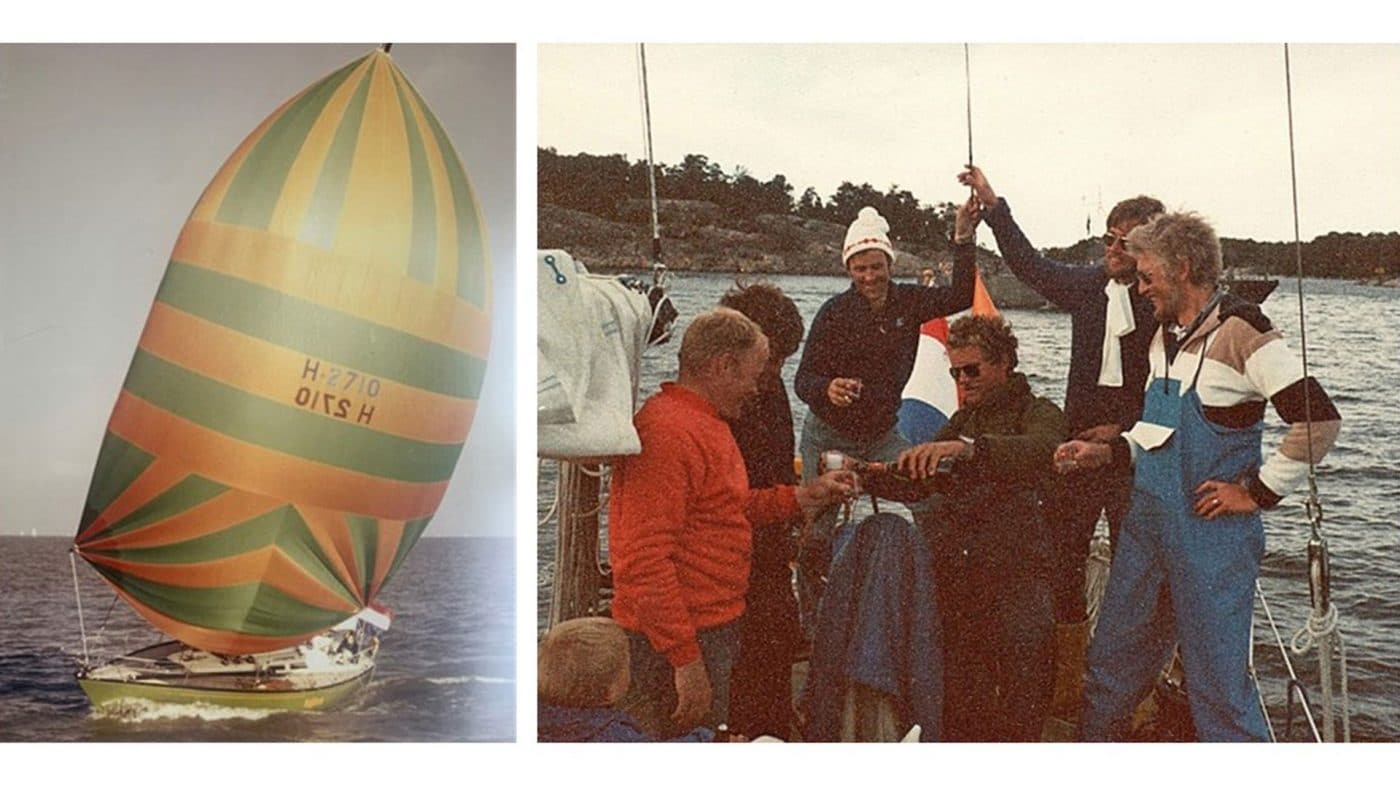 When it comes to the many interesting project I have experienced, during Baltic Yachts history, it is always easy to highlight some of the larger and sometimes extremely High-tech projects we have done. These projects have been getting more publicity and general visibility hence it is natural to create stories around projects like this. And when we look at Baltic Yachts recent and ongoing projects, they are all very large, very high-tech, custom made, individually designed, very special and interesting projects.

It is essential, however, to point out that the many smaller serial production models we have built through the years are historically a very important part of what Baltic Yachts is today. They are the foundation that Baltic Yachts development was started and is based upon. All sizes from the smallest Baltic 33 to our todays semi-custom Baltic 68.

I personally have had the pleasure to sail and enjoy many of these smaller models, by demo sailing, tuning, racing and transport sailing and I have always been and are very proud to have played a part in the development and building of these. There are so many stories that could be told but one that comes into mind is an event with a Baltic 37.

The Baltic 37 was developed during year 1978 with yacht number one delivered from the yard September 1978. The naval architect was Rob W. Ball, C&C Design Canada with deck and interior design by our own in-house people. The design was aimed at general all-round sailing intended to be easy handled, seaworthy performer in any weather conditions and with performance capability for racing. 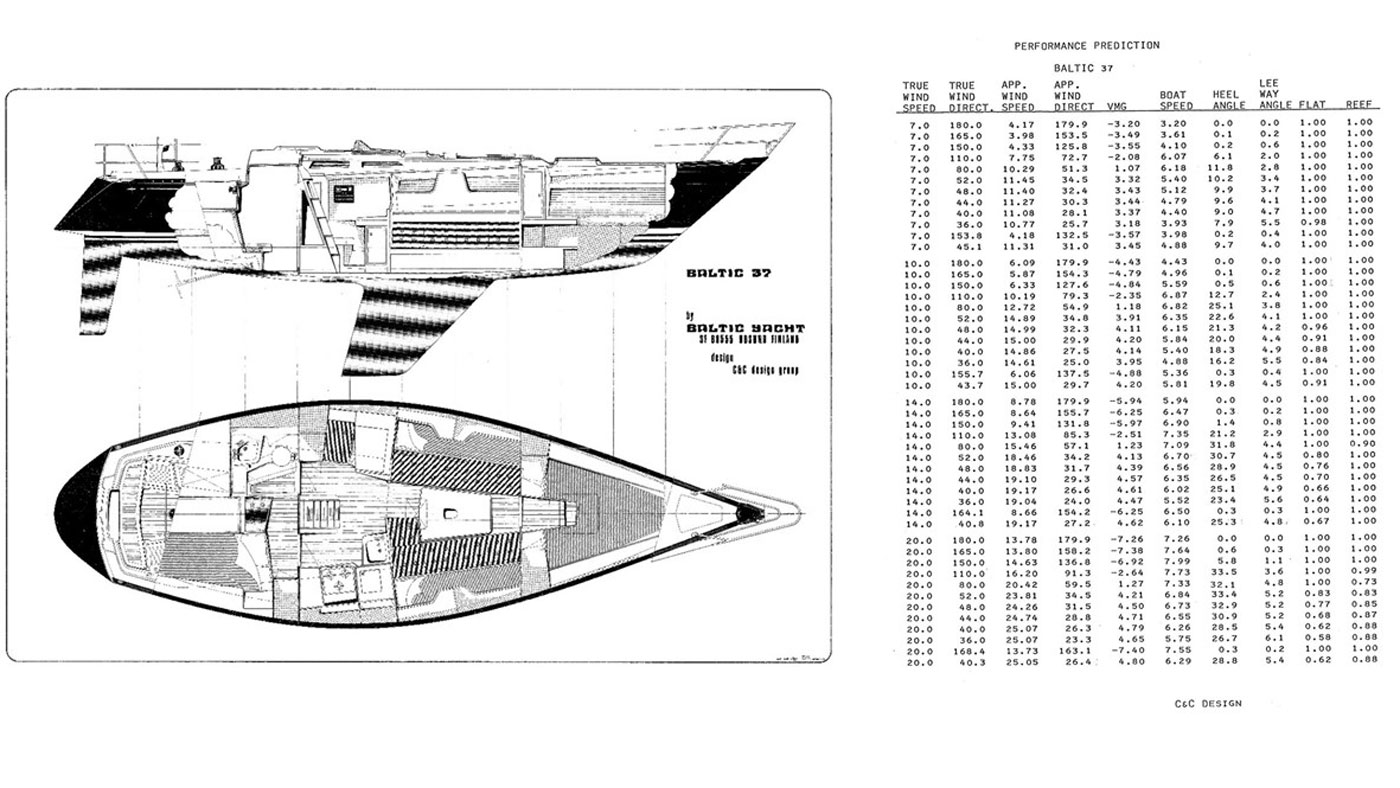 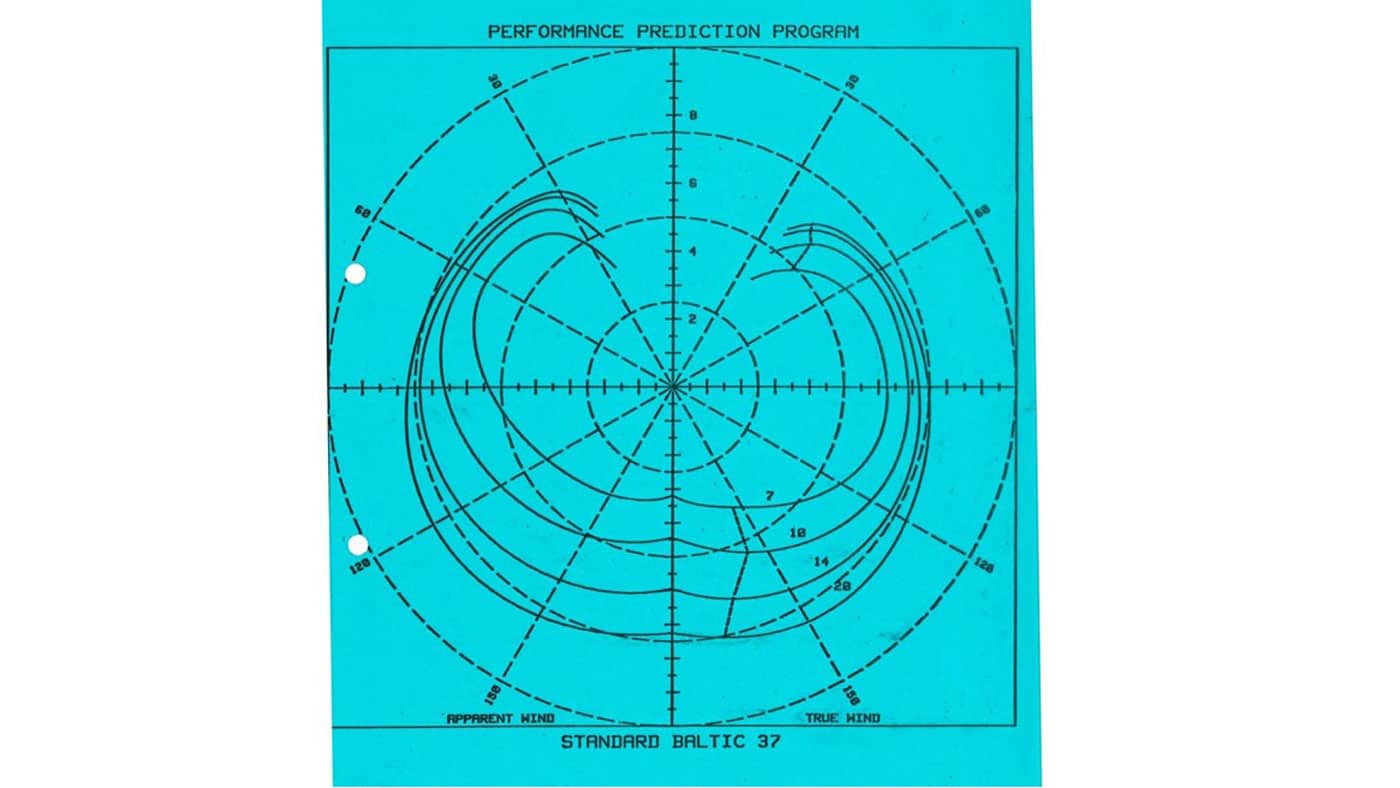 The above is one of the first VPP polar diagram we got from Rob Ball for the Baltic 37. Today this nothing exceptional, everybody has them but in 1978 most yachts were designed by hand, yards and designers did generally not have computers and performance predictions were available from almost nobody. This is just one example on the level of technology that went into the Baltic 37 design.

The first Baltic 37 was delivered late autumn 1978. I still remember the first test sailing we did. A very good feeling, powerful, easy to handle and fast. To say the least it, fulfilled the high expectations we had. 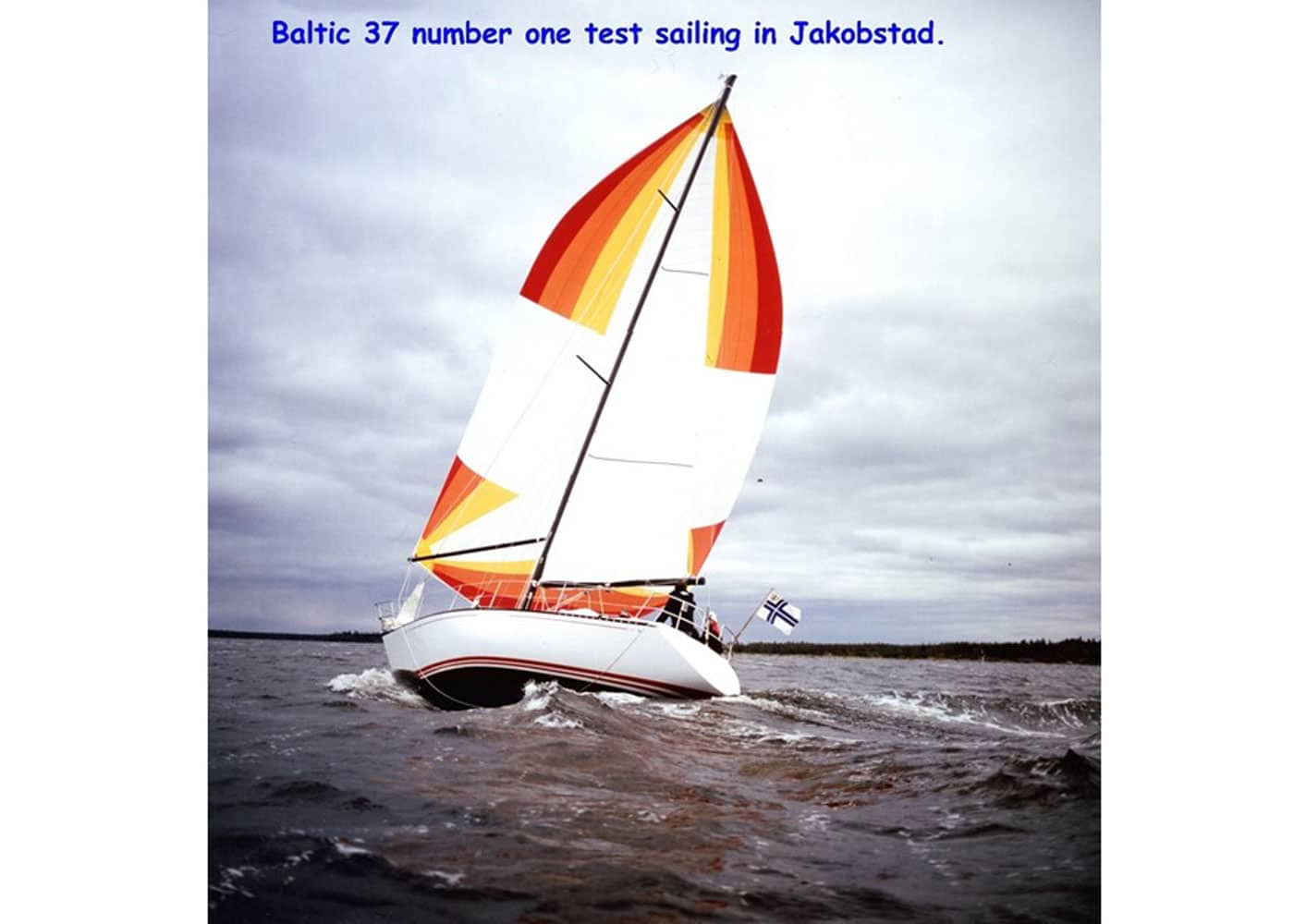 First test sailing in Jakobstad. Fairly strong wind but inshore so no waves. 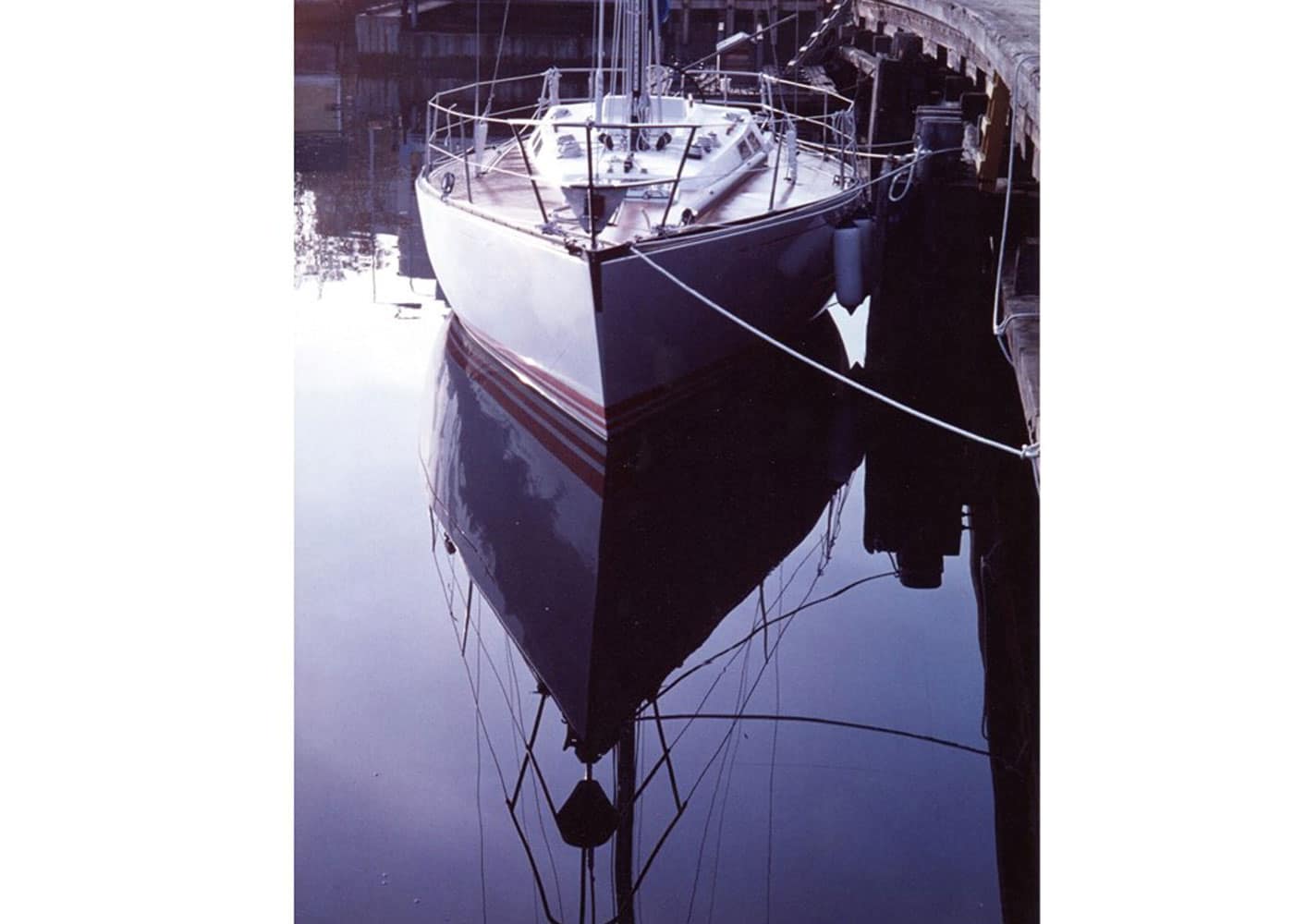 One of the first Baltic 37:s. This photo is taken at the pier we used for launching and equipment installation. This is in the same place Baltic Yachts Jakobstad facility is situated today. Must admit that the place looks a lot better today but, in my mind, the Baltic 37 looked great and easily stands the comparison with today’s yachts.

In the summer, one year later, we delivered Baltic 37 number 14 to our friend and Dutch representative, Hans “Hasse” Krijtenberg. This yacht had a very personalized color combination with a light green hull and orange waterlines. Just by its colors it stuck out from the crowd. 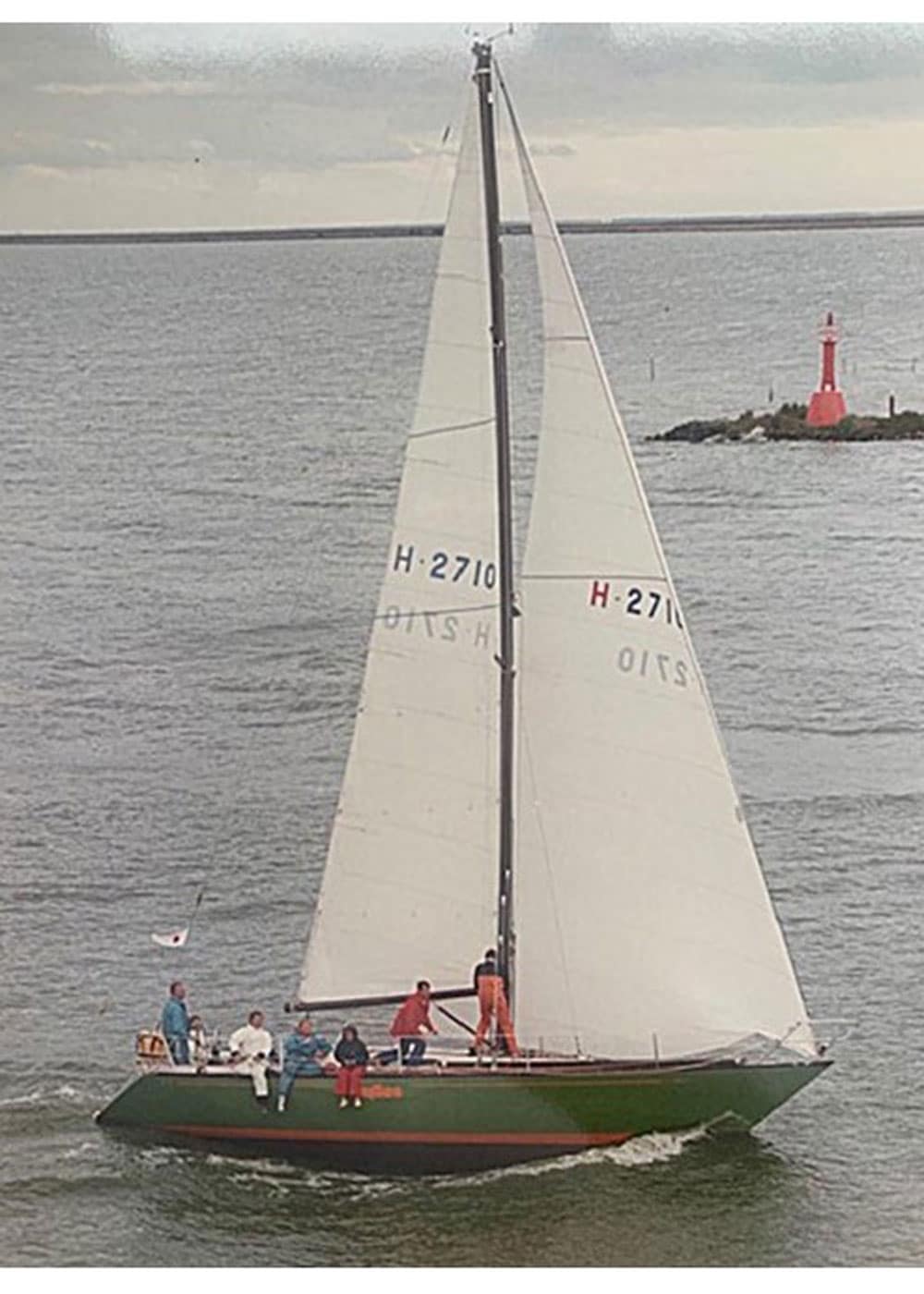 I had the pleasure to sail with “Hasses” Baltic 37 named Hyllos and got to know the yacht very well. Hans “Hasse” K. sailed Hyllos from our yard to Holland and on his way down he decided to participate in the “Gotland Runt” race. I was invited to sail with him, and we got a number Swedish friends with us in the crew. We did very well in the race, considering it was the first racing the boat did. 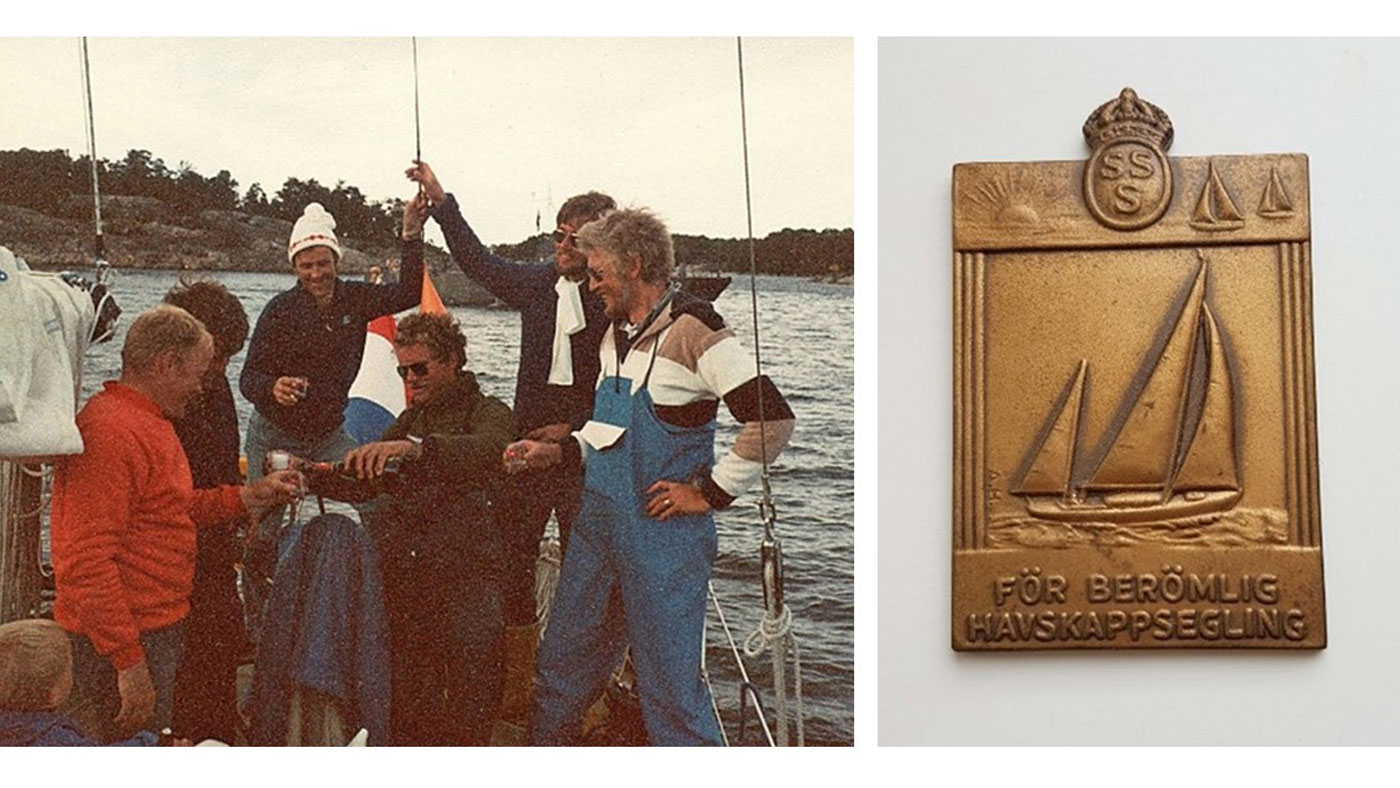 Sometime later I also participated in a race on Ijsselmeer in Holland and with time I had the opportunity to sail much more on Hyllos.

In our business and the position, I have been in you very often experience very special situations, sometime good ones sometimes not so good.

I remember a very special journey I had onboard Hyllos. We had just finished a floating show in Rotterdam and it was agreed that we could move the 37 to Southampton floating show. Hans went as crew on a Swedish Baltic 51 “Diamond” (also used at the Rotterdam floating show) sailing it back to Sweden and my mission was to sail Hyllos to Southampton. I had one of Hans’ sailing friends, Bart and Barts brother Roel, with me so we were a slightly short crew for the trip. I knew Bart fairly well, a good sailor and seaman, so I felt reasonable comfortable although weather forecast warnings indicated a tough trip.

The warnings were justified. A little outside of Rotterdam harbor entrance we were already down to fully reefed main and storm jib. Strong winds from South to Southwest and difficult waves. Our B&G wind speed meter showed maximum 65 knot and we had the needle on the max pin for a long time, indicating that wind strengths were substantially higher than 65 knots. These conditions were the same for most part of the trip.

We did a short stopover in Dover. I remember calling the Dover harbor authorities for permission to enter they asked: what kind of ship are you? When we answered, a 37 FT sailing yacht on way from Rotterdam to Southampton, they were very surprised, to them it was almost unthinkable that a sailing yacht this size would, voluntarily, be out there in those conditions. At the port of Dover most ferries going over the Dover Straight was cancelled due to the bad weather and for the ones still trafficking they had large signs telling passengers something like: “If you really don’t need to travel, don’t”.

We continued toward Southampton, and I remember that on the sea charts we had, there was a warning for the area south of Beachy Head that waves could become dangerously large and difficult in strong, South Southwesterly, winds. Rounding Beachy Head, I could conclude that the warning was justified. 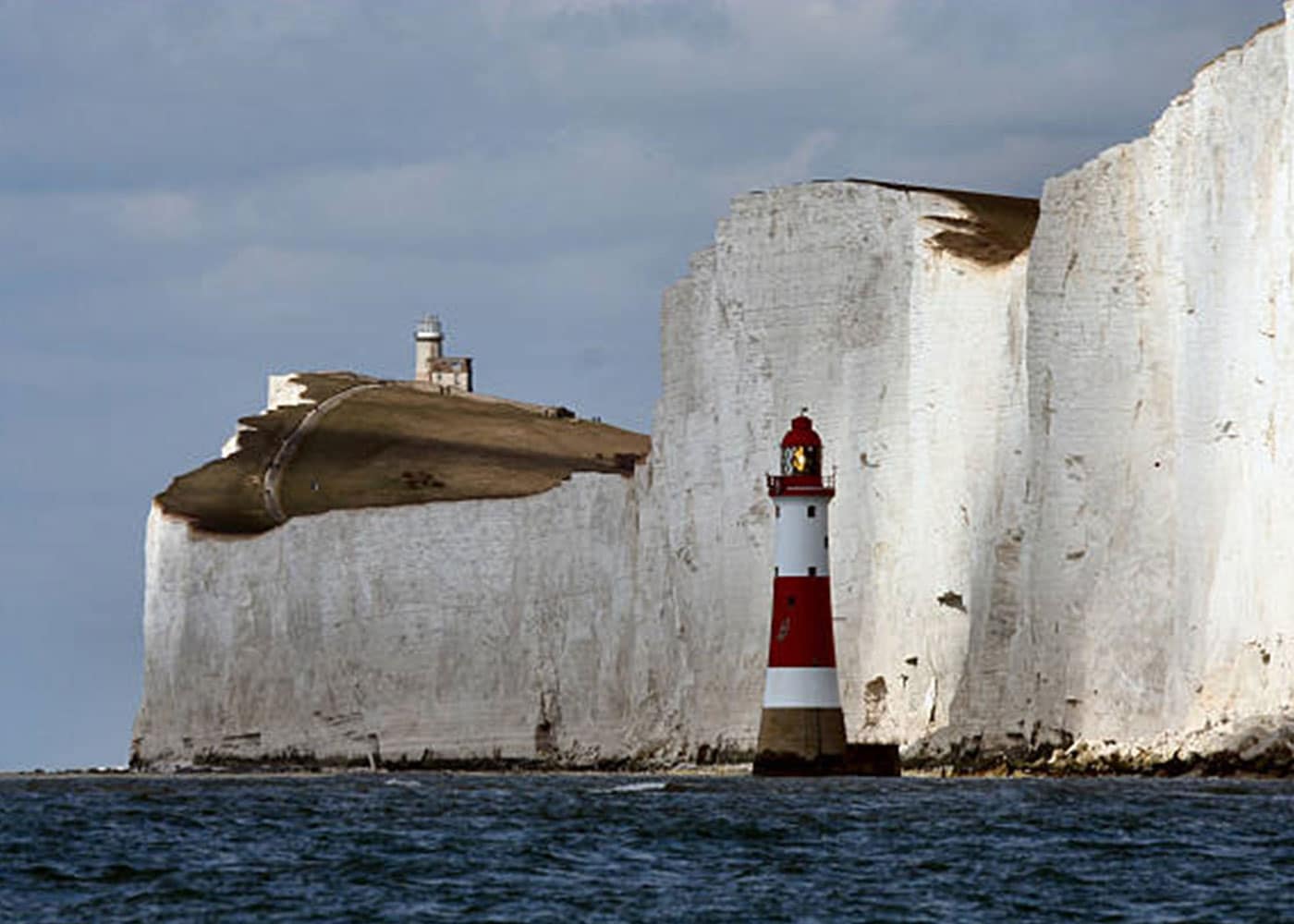 Beachy Head in much calmer weather than when we were there.

We arrived at the Southampton Boat Show, in the afternoon, with the show starting the next day. Some yachts were still missing due to the weather conditions although they had a much smaller distance and challenge, then us, to get to the show.

Yachting Worlds “One of a kind rally”.

After the Boat Show we had another program booked. We had entered Hyllos in the Yachting World magazine “One of a kind rally”. This was a kind of event were the magazine collected a number of yachts, in the same size range, from various yards and made an evaluation of the yachts in question. There was a group of judges consisting of specialists, journalists, designers etc. that evaluated the competing yachts regarding concept, quality, sailing performance, engine performance and handling characteristics etc.

We sailed Hyllos to Lymington, were the “One of a kind rally” took place. At this time Hyllos owner, Hans “Hasse” K. had joined us.

I don’t remember the exact number of participants but a good number of yachts from the best European yards were represented in boat sizes 36 – 38 FT LOA.  We spent 2 – 3 days going out with various judges, sailing, motoring, and trying to explain the thinking and philosophy behind our products. The judges seemed to like the Baltic 37 and gave it top reviews. 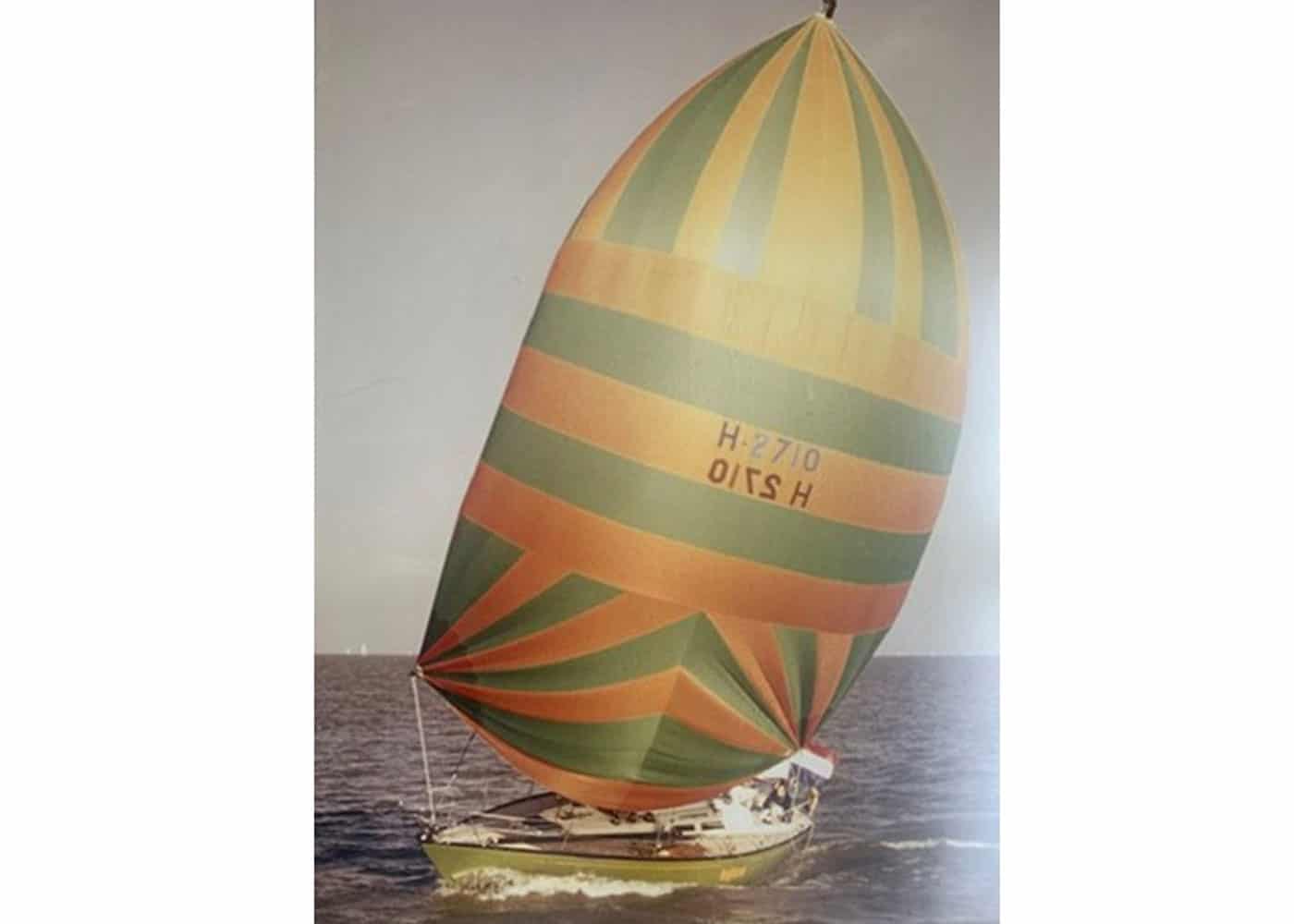 The last day of the “One of a kind rally” was a short distance race. When I saw the other boats getting ready for the competition, I noticed that suddenly there were some sailmakers, famous competition sailors, sailing rockstar on board some of the other boats and it became clear that everybody was making an effort in order to perform in the race. I must admit, that for a few seconds, I had some doubts regarding our chances in that race. We had no “super sailors” onboard so, based on that fact, my doubts were perhaps justified. But reality would prove that my doubts were unfounded.

The race was simple, just along the cost rounding a mark and back. It was an even start with all the yachts pretty much on the same line. Hans “Hasse” K. was helming, very concentrated, and did a very good job. Slowly we started to pull away from the other. We rounded the mark as the first boat, well done so far.

However, rounding the mark, we noticed that the tidal stream was against us and strong enough to reduce our speed over ground to almost zero. This resulted in a situation where all the boats got together at the mark, and we had what could be called a re-start.

As the wind picked up all boats started to move and produce some VMG. Again, we started to pull away from the others and we crossed the finishing line as number one.

It was a short race and almost identical boat sizes so the differences in boat speeds were very small. However, we proved, twice during the race, that we did have slightly better boat speed than our competitors.

When I today look back at those weeks, sailing the Baltic 37 Hyllos from Holland to Southampton, participating in the Boat Show and the “One of a kind rally” I must say that I am very proud of what our team of designers, engineers and exceptional boatbuilders were capable of creating as far back as in the 1970s. The design, engineering and building quality that the Baltic 37 represents stands out more than well compared to today’s boats in the same size class. And this is a product built more than 40 years ago.

I must also say that our rough weather sailing trip was on the edge of what one should do and still be considered as wise seamanship. I had excellent assistance from Bart and his brother but more important, I had personally been involved in the development of this yacht and I knew the designers, engineers and every boatbuilder involved in the product and had the greatest confidence in them and the product they produced.

Thank you Hans “Hasse” K. for your friendship and support. 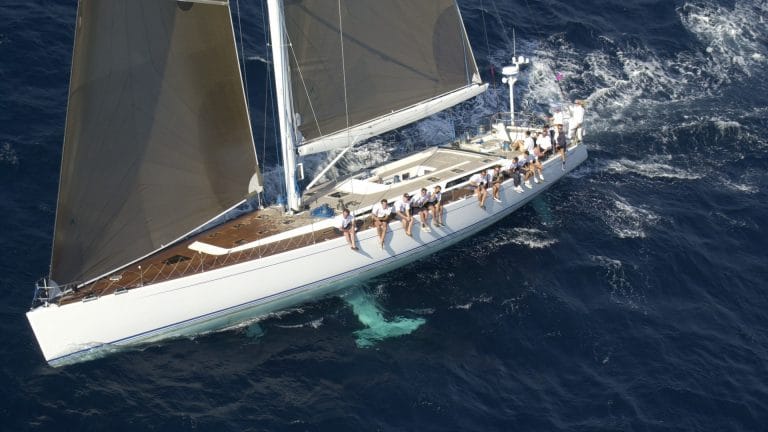 As mentioned earlier, one of the most rewarding things, in our segment of the yachting business, is the interesting and... 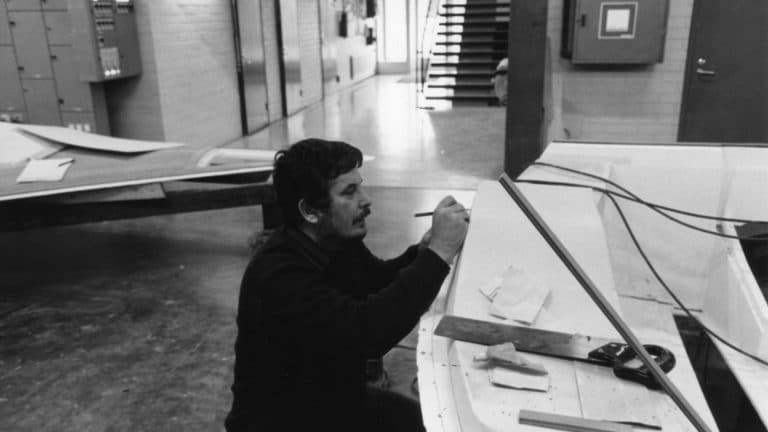 Today, Baltic Yachts is a custom builder hence styling and layouts are fully up to what the client is looking...