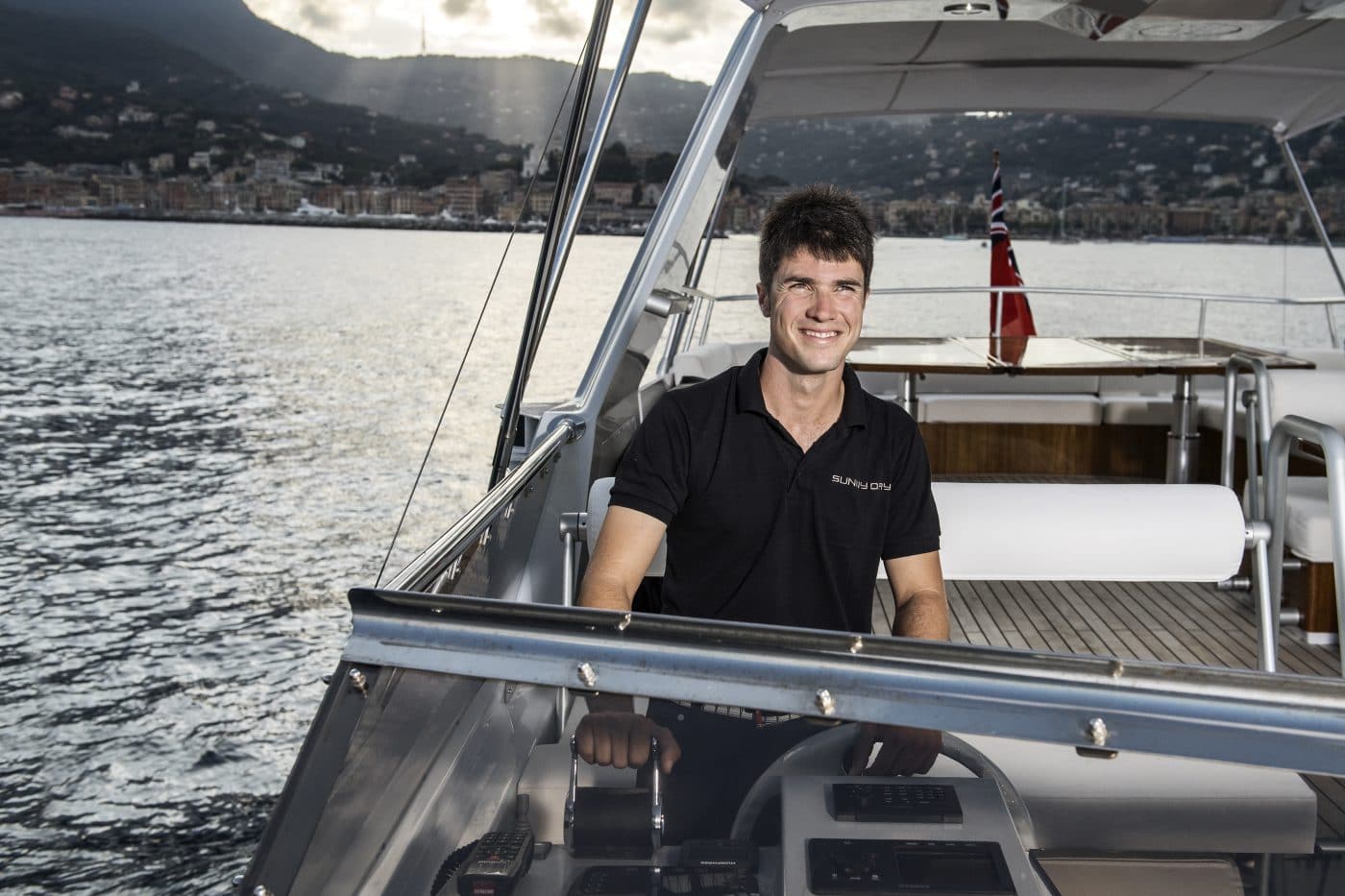 The skipper of Pink Gin VI has moved quickly through the ranks of superyachting and his dedication and interpersonal skills have identified him as a man with a bright future. For Spaniard Oscar Vallejo his appointment as skipper of the world’s biggest carbon fibre sloop Pink Gin VI is the undoubted highpoint in a short, but action-packed career in superyachting. Oscar, who was born and brought up in Mallorca, joined the industry by accident.

From dive center to sailing the seas

Working as an instructor in a dive centre in Palma, he was asked to carry out a small underwater repair on the 35m classic Sangermani schooner Seljm, which at the time was being skippered by the experienced American Steve Ray. Oscar duly completed the task, but refused to be paid saying he was glad to be of assistance. Ray offered to show him round Seljm instead, Oscar accepted and before long he had a job as deckhand for the upcoming transatlantic passage to Antigua.

But just before they were due to leave he suffered a deep wound to his knee in a motorcycle accident. Despite the severity of the injury Ray backed him for the crossing.

Extraordinarily he couldn’t speak a word of English when he joined Seljm so set about teaching himself by watching an English film with sub-tiles more than 200 times.

“It was more effective than school,” said Oscar. By now a competent, highly valued deck hand, Oscar remained with Seljm on visits to northern Europe and the Mediterranean where he eventually met Pink Gin V’s previous skipper and now yacht manager.

Keen to progress in the industry, Oscar took the Pink Gin mate’s position and immediately sailed to Uruguay for Christmas. During a subsequent passage to Miami Oscar was awestruck by Pink Gin’s performance. “It was incredible, we were sailing at 18.5 knots for two and a half days,” he said. With visits to the Brazil World Cup, Cuba, for which Pink Gin V’s owner Hans Georg Näder has a particular penchant and other Caribbean islands, Oscar quickly built his experience. But what happened next proved an acid test of his fledgling leadership skills. Aboard Pink Gin V as mate, with skipper, crew and three additional delivery crew, Oscar suddenly found himself in command of the yacht a week into an Atlantic crossing.

One morning Oscar found the captain in his cabin in excruciating pain, totally incapacitated. With St Martin, Bermuda and the Azores almost equidistant and at least three days away, Oscar, now in command, had to make a decision.

Checking with weather routers, doctors and rescue services he decided to head for Bermuda. With authority and confidence he explained to a bemused crew what had happened and, more to the point, what was going to happen next. He duly brought Pink Gin V safely into Bermuda where the skipper was immediately taken to hospital and successfully treated for a golf-ball sized kidney stone.

Ready for the biggest challenge of his life

This feat, Oscar’s ability and willingness to get on with the job impressed Professor Näder. “When I said no to taking the Pink Gin VI job he just laughed!” said Oscar. “He said that when he was my age he took over the family business, so why not?” Eventually he relented. As a dry run Professor Näder asked Oscar to skipper his 25m motor yacht Sunny Day last summer in the Mediterranean.

Having passed that test he is now at Baltic Yachts in Finland where he is preparing to take command of Pink Gin VI. The realisation that taking command of Pink Gin VI will be his biggest challenge yet is daunting but Oscar’s clear ability to delegate, prioritise and care for the team supporting him has engendered respect among those who are working around him. We wish Oscar the very best of luck and great sailing aboard his new command.