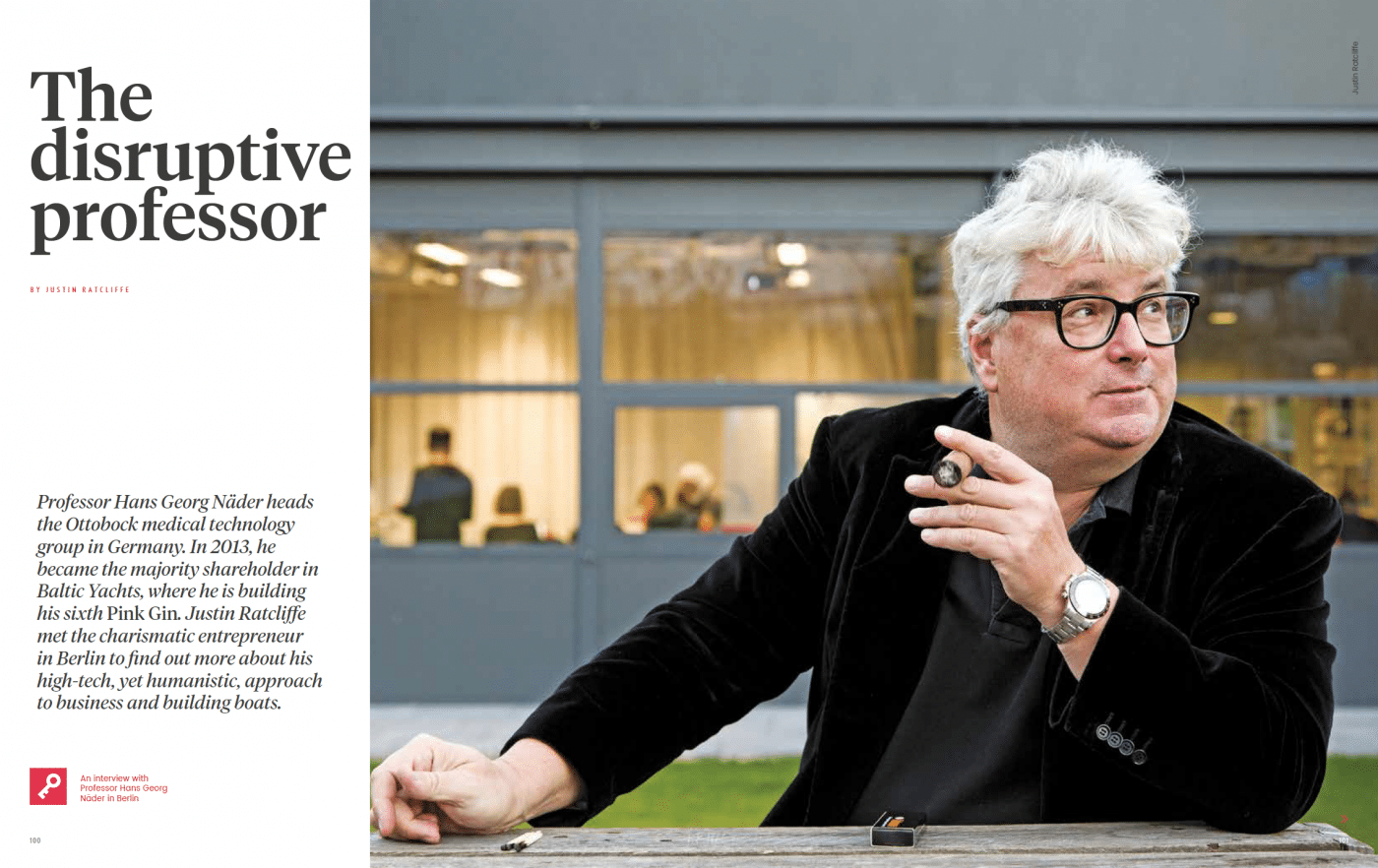 In 2013, Professor Hans Georg Näder became the majority shareholder in Baltic Yachts. Now he shares more about his vision and thoughts on the future in Super Yacht Report 3/2013.

Professor Näder is not your typical corporate executive. With his shock of ivory hair and penchant for colourful scarves and Cuban cigars, he looks more like an artist or composer than the CEO of a company that produces 60 per cent of the world’s prosthetic aids, generates annual revenues of over a billion euros and employs some 8,000 people in more than 50 countries. In fact, this first impression is not so far from the truth. Näder sees himself as the ‘conductor’ of the Ottobock empire, identifying technological innovation and the employment of the right people in the right place as the keys to the success of the familymanaged company set up by his grandfather almost a century ago. Since acquiring an 80 per cent stake in Baltic Yachts, he is applying the same business principles to reignite the Finnish brand in today’s challenging market. “I shouldn’t give advice to people who have been in the industry for many years,” says Näder in his self-effacing way. “I can only focus on best practice, which for me is driven by quality, innovation and expanding the portfolio.”

Our meeting takes place at the Ottobock Science Center in downtown Berlin. Known as the ‘muscle house’ for its organic facade inspired by human muscle fibres that also recalls the flowing lines of a yacht, the building is an eye-catching piece of architecture among the city’s traditional stone buildings. Näder has just flown in from Rio de Janiero where he had attended the Paralympic Games. His company has been at the heart of the Paralympic movement since the 1988 Games in Seoul, and the Science Center provides interactive insight into the technologies the company has developed to enhance mobility. These solutions range from carbon-fibre running blades and custom wheelchairs for Paralympic athletes to microprocessor-controlled limbs that simulate the natural movement of the knee joint and bionic hands that can be controlled by muscle signals to execute different types of grasping. The company’s commitment to neuro-orthopaedic research is personified by two bronze sculptures of a homunculus on the roof of the Science Center. Derived from the Latin for ‘little man’, the curious figures represent a neurological map in human form of the motor and sensory parts of the body.

The link between prosthetics and superyachts might seem a tenuous one, but the synergy derives from Näder’s fascination with technology and progress. ‘Neugierig’ is one of those wonderfully concise German adjectives used to express our curiosity to know more and discover new things. Struggling to find the right translation, Näder draws on the word to describe his own inquisitive nature and, in particular, his obsession with innovation through disruption. “Innovation is all about finding solutions that work,” he says, flourishing a prototype prosthetic hand made from silicon. “At Ottobock, we innovate every day and have progressed from mechanical to mechatronic solutions in a disruptive way. We’re now working on mind-body interfaces and moving into biotech with 3D-printed muscles and tissues.” In the same manner, Näder views the superyacht industry as fertile ground for disruptive design and technology. Pink Gin VI, in build at Baltic Yachts, is a prime example of his philosophy at work. When the 54m sailing yacht is launched later this year, it will be the largest carbon-fibre sloop in the world

Read the full story here in the latest issue (03/2017) of the SuperYacht Report.