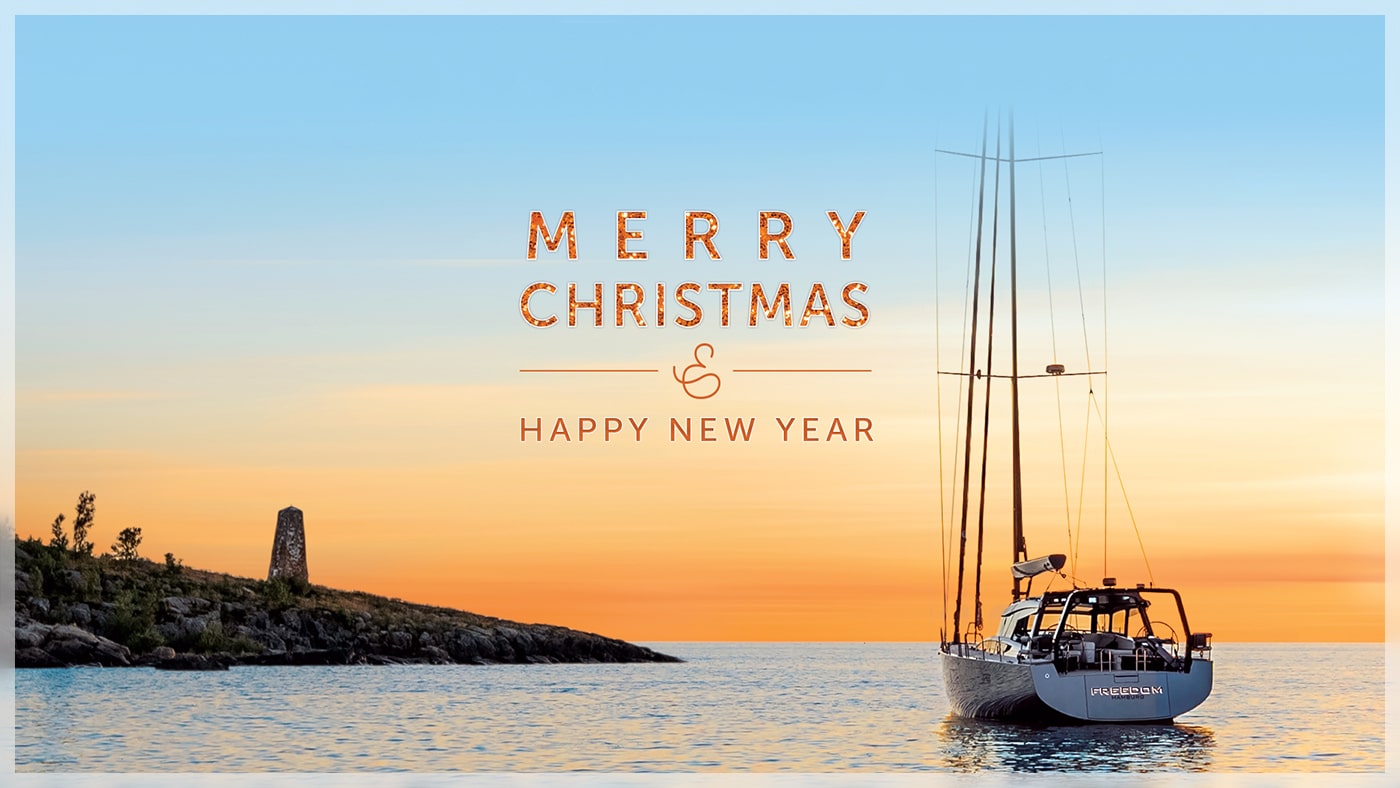 The past year has seen many successes for Baltic Yachts, both at awards ceremonies and on the race course. Baltic 117 Perseverance was voted Yacht of the Year, praised for her power-saving innovations and naval architecture, Baltic 146 Path won her class in the same World Superyacht Awards and Hetairos took the St Barths Bucket, defending the title she won in the pre-pandemic 2019 event!

We’ve also been exceptionally busy back in Jakobstad where we launched Baltic 67PC-03 Freedom, which illustrates this Christmas greeting, and progressed well with the construction of the multi-role Baltic 110 Custom, the super-light Baltic 111 Custom and Open Season, the latest version of the well-received Baltic 68 Café Racer. We have also recently signed a new Baltic 80.

Our expanding Service and Refit operation continues to build in importance with a major refit of the 115ft Jasi one of many projects completed in Palma. We’ve fitted a new advanced composite hardtop to Baltic 175 Pink Gin, built in our new workshop facility just outside Palma’s city centre, undertaken substantial work on Baltic 107 Inukshuk and completed an eight-month, major refit of the 1993-built Baltic 43 Tuuli.

Next year we will be celebrating our 50th anniversary with a series of events involving the local community and the whole Baltic Family. We will be paying tribute to our founders, to today’s highly skilled workforce and highlight our willingness to embrace and develop new technologies in-house and alongside a wide range of long-term partners.

The launch of three new yachts, the refit of Baltic 46 Queen Anne, the first yacht we ever built, and the expansion of our Jakobstad yard with a new purpose-built facility, will all be part of our 50th birthday celebrations.

To round off activities in 2023 we will be returning to Porto Rotondo, Sardinia where we will be hosting a special Baltic Yachts’ 50th Anniversary Rendezvous Regatta running from 14-17 September.

A very Happy Christmas and a Peaceful, Prosperous New Year to you all!

Since 2019 we have replaced Christmas cards with donations to organisations which aim to protect and improve the environment in the Mediterranean and Baltic Sea. They are Save the Med and the John Nurmisen Foundation, details of which can be found using the following links: