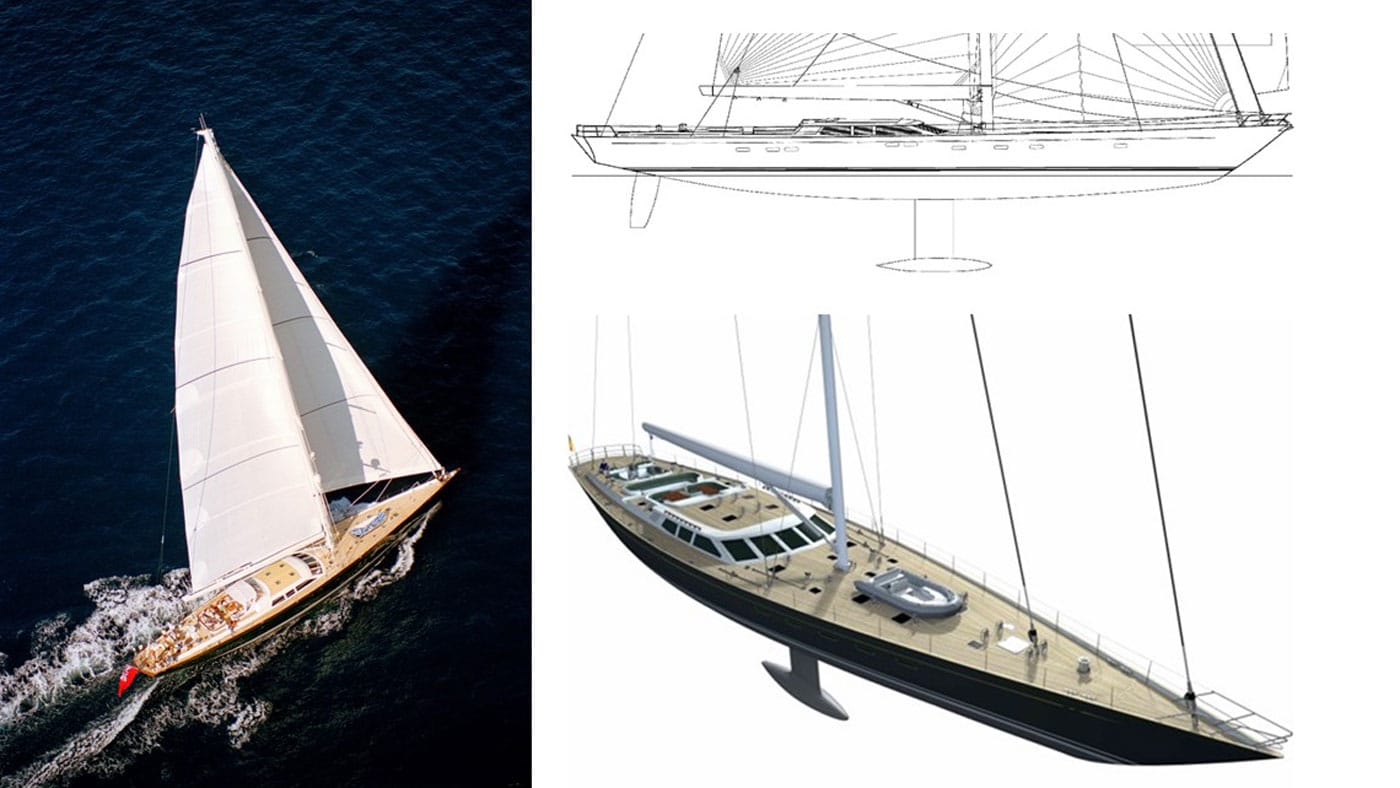 In my earlier telltales I mentioned the canting keel 56 footer we made as an interim yacht between the 97 Pink Gin and the 152. This is the 152 story.

Sometimes around 2003 – 2004 the Pink Gin owner, Professor Näder, started to talk about eventually developing a new larger Pink Gin. After a few discussions and proposals, a contract for the new 152-Footer Pink Gin was agreed upon and signed and the project was on its way.

This was our largest project at the time and did require substantial inputs, naturally from the owner himself but also from the whole team involved. The owner had succeeded in creation a very effective and constructive team of people for this project. 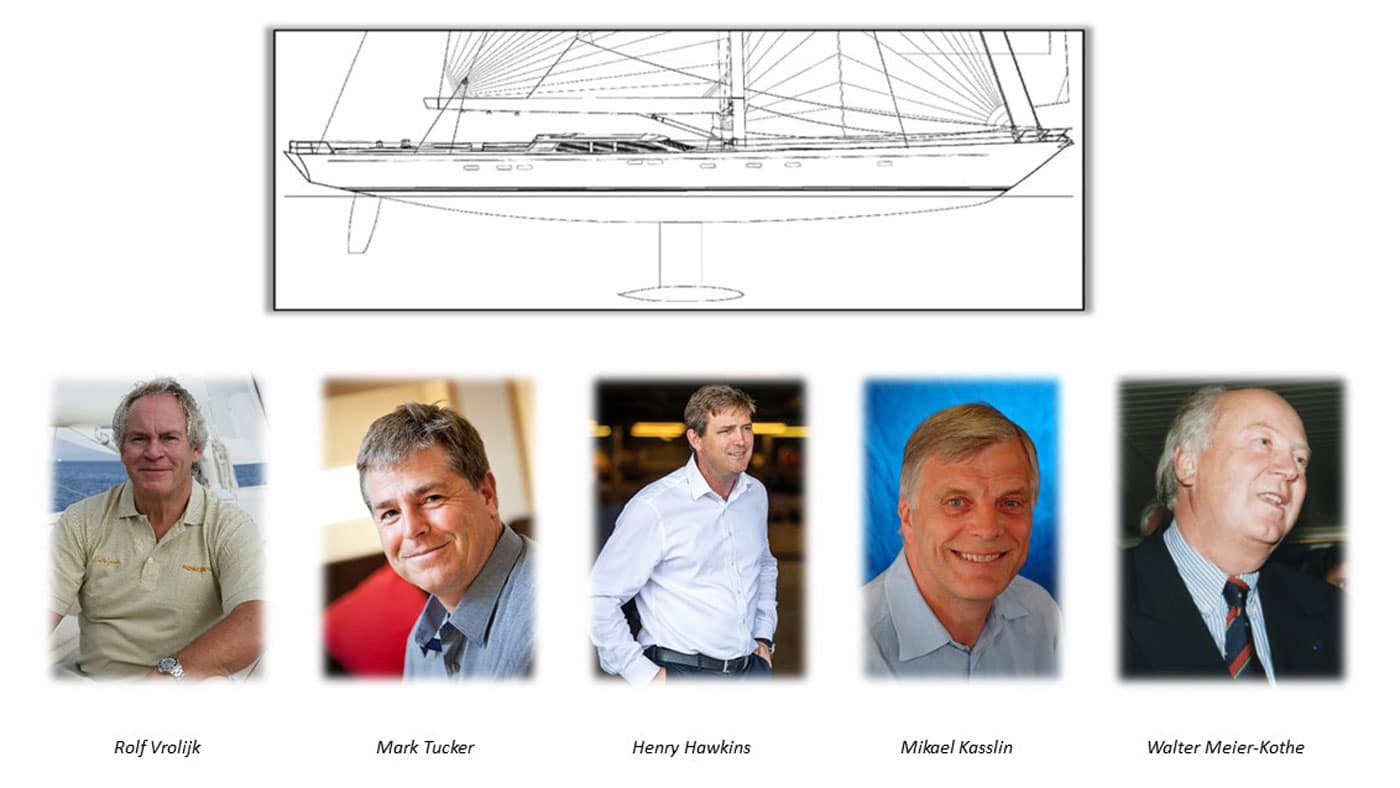 The Naval architect was Judel/Vrolijk and especially Rolf Vrolijks personal input was essential for the development of the design. He played a very active role through the whole project from the developing stage to the completion of the project.

Another very important player in the team was the design company, Design Unlimited, with Mark Tucker and his team. They communicated closely with the owner, tuning the layouts and varies designs issues down to very detailed issues, layout, styling material selections etc. Based on inputs and communications with the owner, Mark and his team produced a large number of proposals for the owner to select from.

Mark and his team did a tremendous job resulting in a number of future exciting projects for Prof. Näder.

Another key player in the team was Henry Hawkins. Henry was hired as captain for the 97 Pink Gin and his position quickly developed into a central important role in Prof. Näder’s yachting activities.

The yards responsible project manager for Prof. Näders previous projects had all been handled by Mikael (Mikki) Kasslin and he must have done a good job because he was specifically asked for, by the owner, to also be responsible for this project.

And as for many other projects, including the 97 Pink Gin, our German representative, Walter Meier-Kothe,  played a key role in the development and realization of this project.

The Pink Gin 152 team consisted naturally of many other people, but I guess it is fair to say that these five played significant, visible roles, in the realization of this project.

Large projects like the 152 requires a project team. You have naval architects, stylists, owners’ representatives, other specialists etc. involved. The outcome of a project often depends on how effective the team is. Its not only to have very knowledgeable individuals in the team its also very much up to having the right spirit and cooperation in the team. In some teams you see team members that works to improve their own position, and sometimes on the expense of some of the other members.

The ideal team should have a high degree of cooperation spirit with the objective to work for a goal that implements and realizes the visions of the client.

Baltic Yachts has been fortunate to have a number of really good teams for many of our projects, but I would say that the 152 Pink Gin team is a very good example of how a successful team should work, the result proves my point. The owner naturally plays an important role in the team’s success, not only as a member of the team but he is also the person who most influences the composition of the team.

My personal experience is that, if you get the right people involved, with the right knowledge and spirit, you are halfway to reach your goal.

But you can have the best project team but without good people, engineers, foremen and most important good workforce the dreams and intentions will not be materialized. 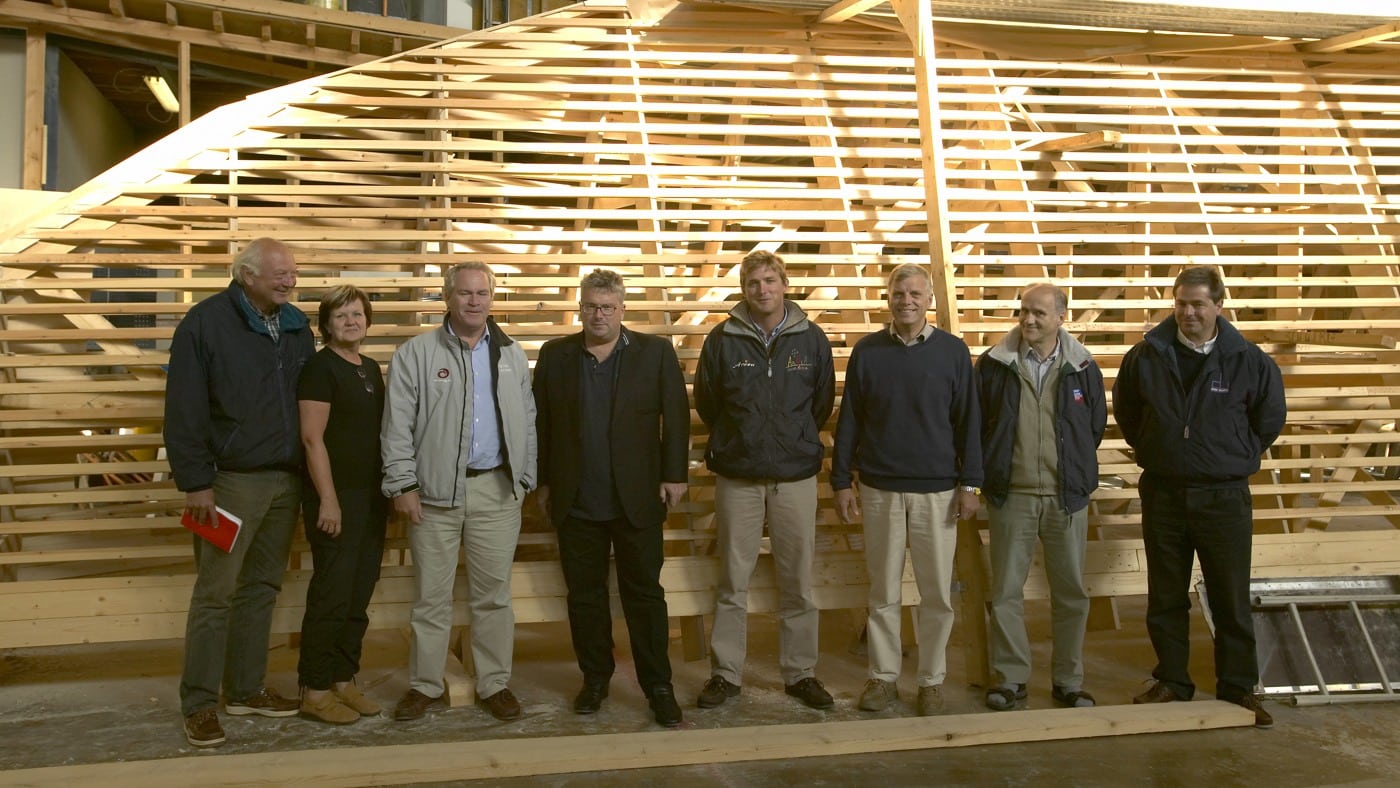 First “team meeting” at the yard in front of the hull plug. 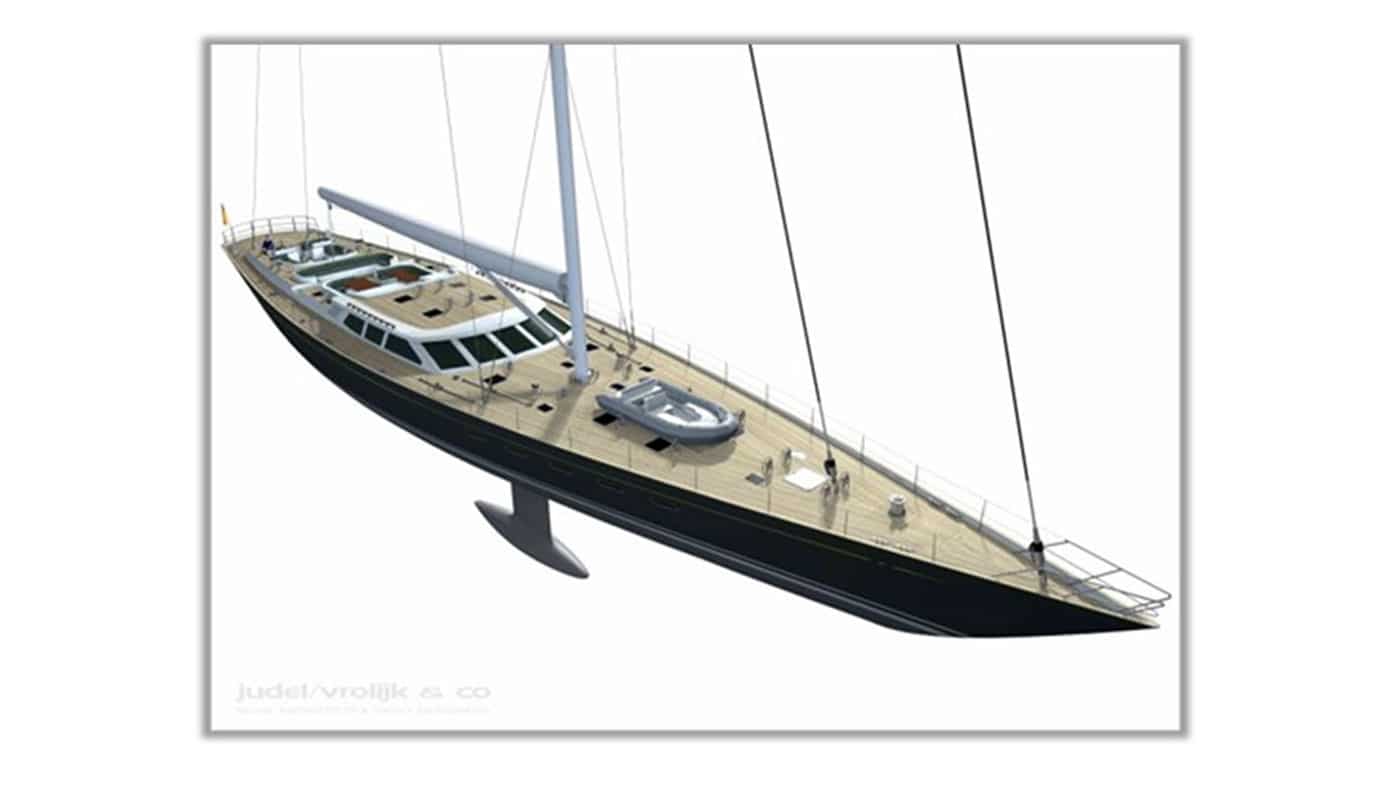 One of the early Judel/Vrolijk 3D exterior studies. Note the recess for the dinghy in the foredeck.

Many interior studies and 3D rendering proposals was produced by Design Unlimited. Some examples: 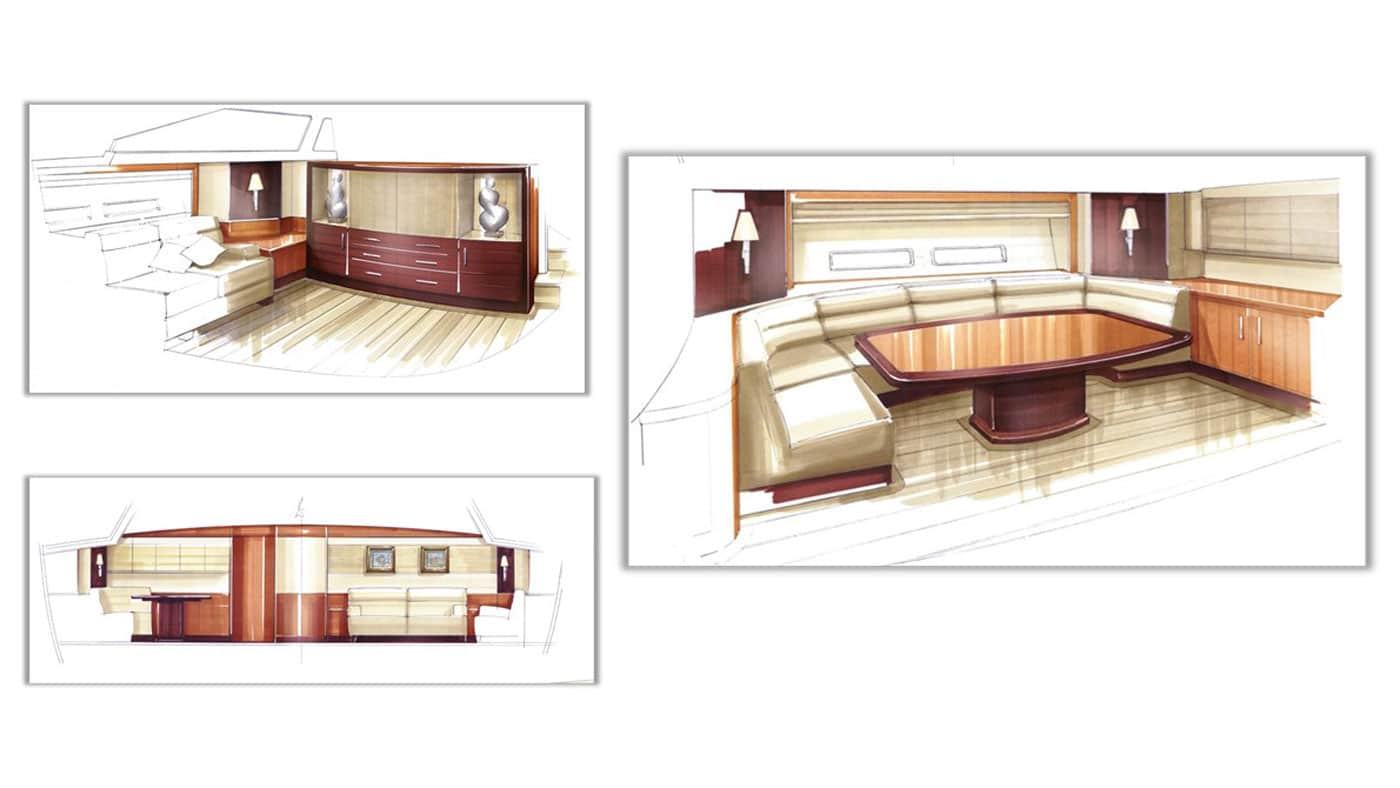 A lot of activities and decisions took place in an early stage of the project giving Baltic Yachts team the base for a very effective production. 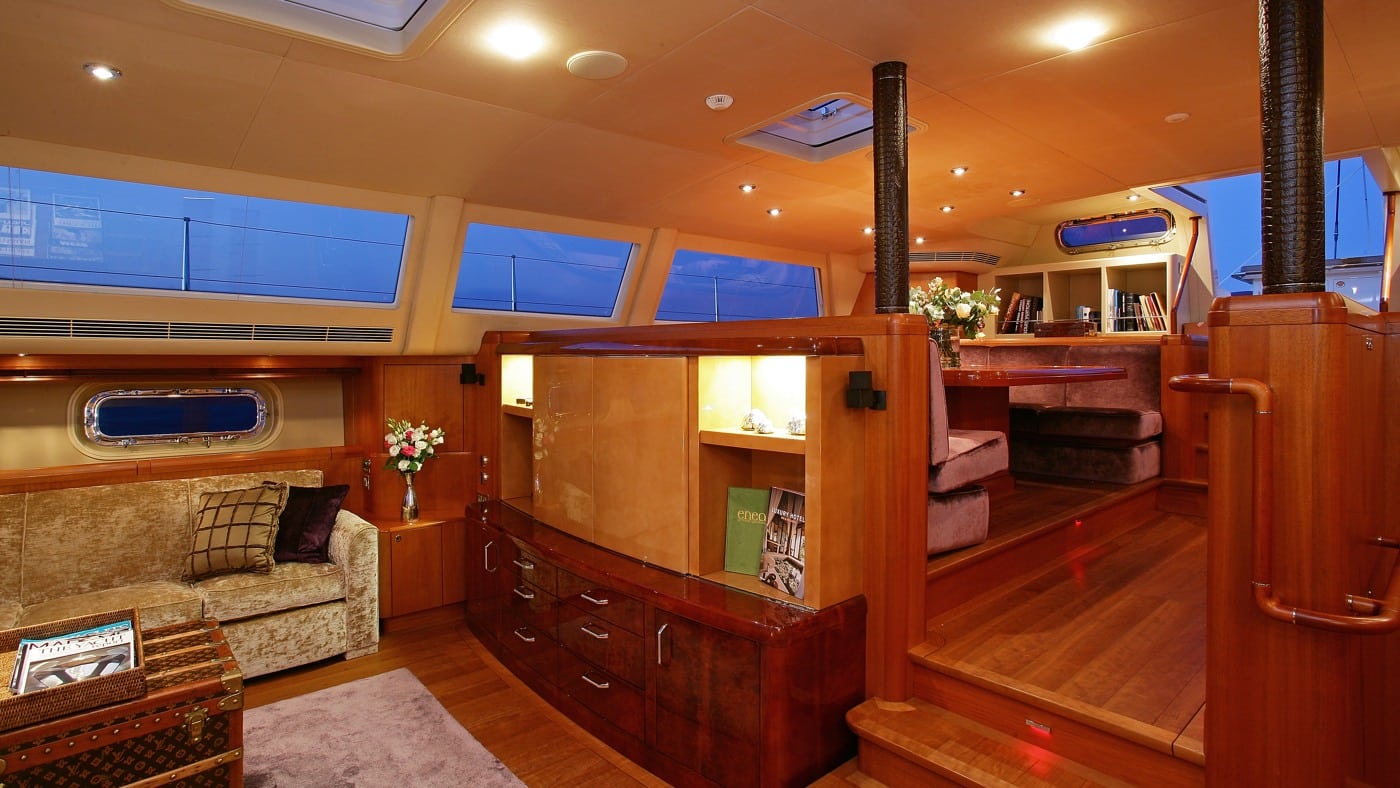 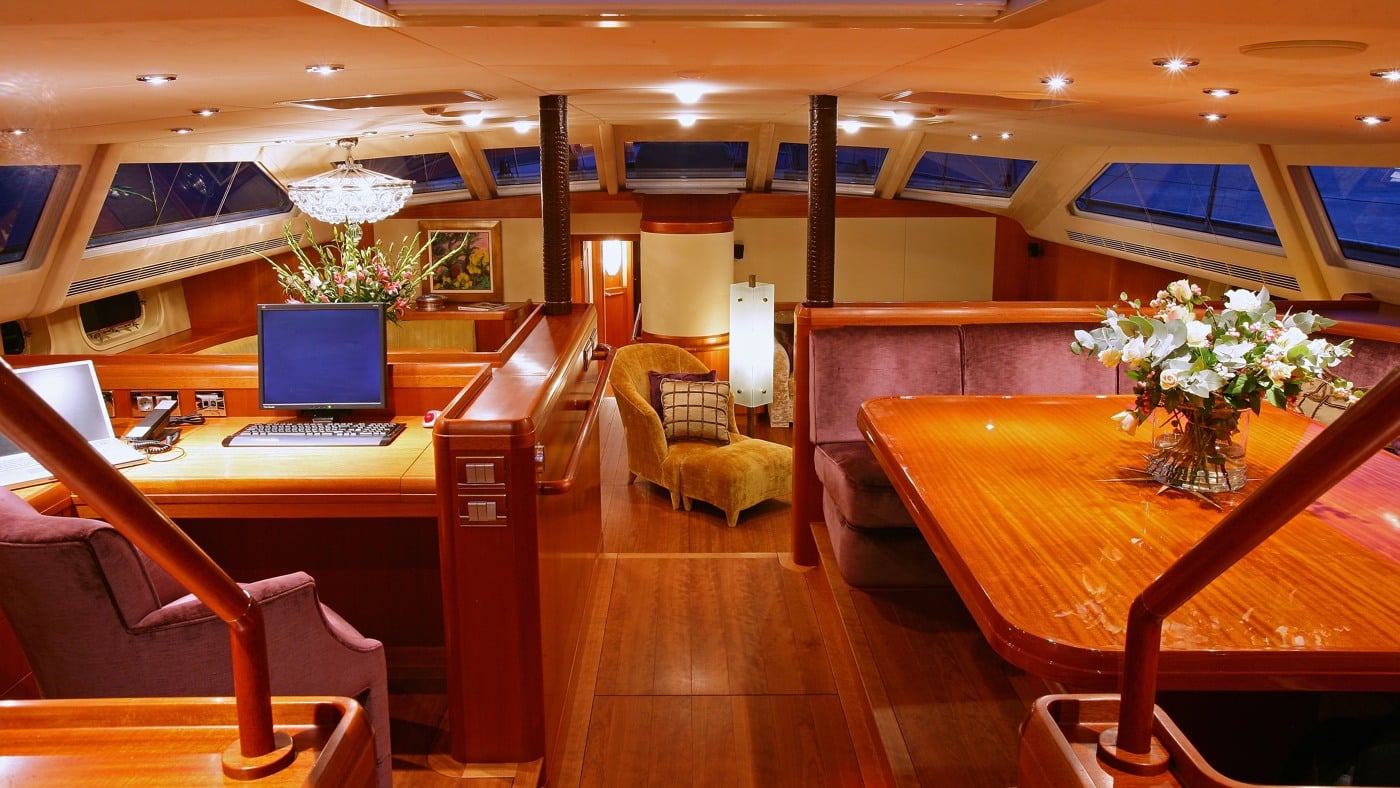 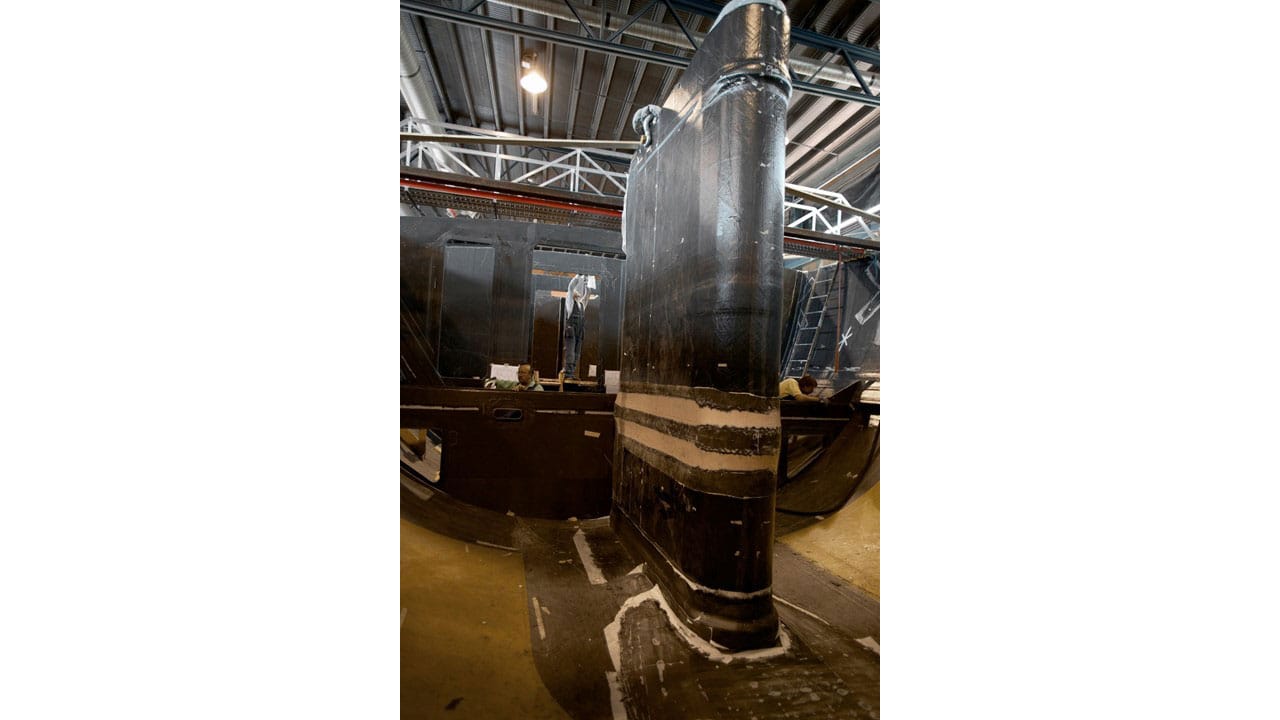 Pink Gin was a project that too a great extent aimed at very comfortable cruising hence included equipment and solutions that created bases for a good cruising comfort. But as can bee seen on the picture above sailing performance was also a factor hence very high-tech building techniques and materials used in the construction in order to save weight. 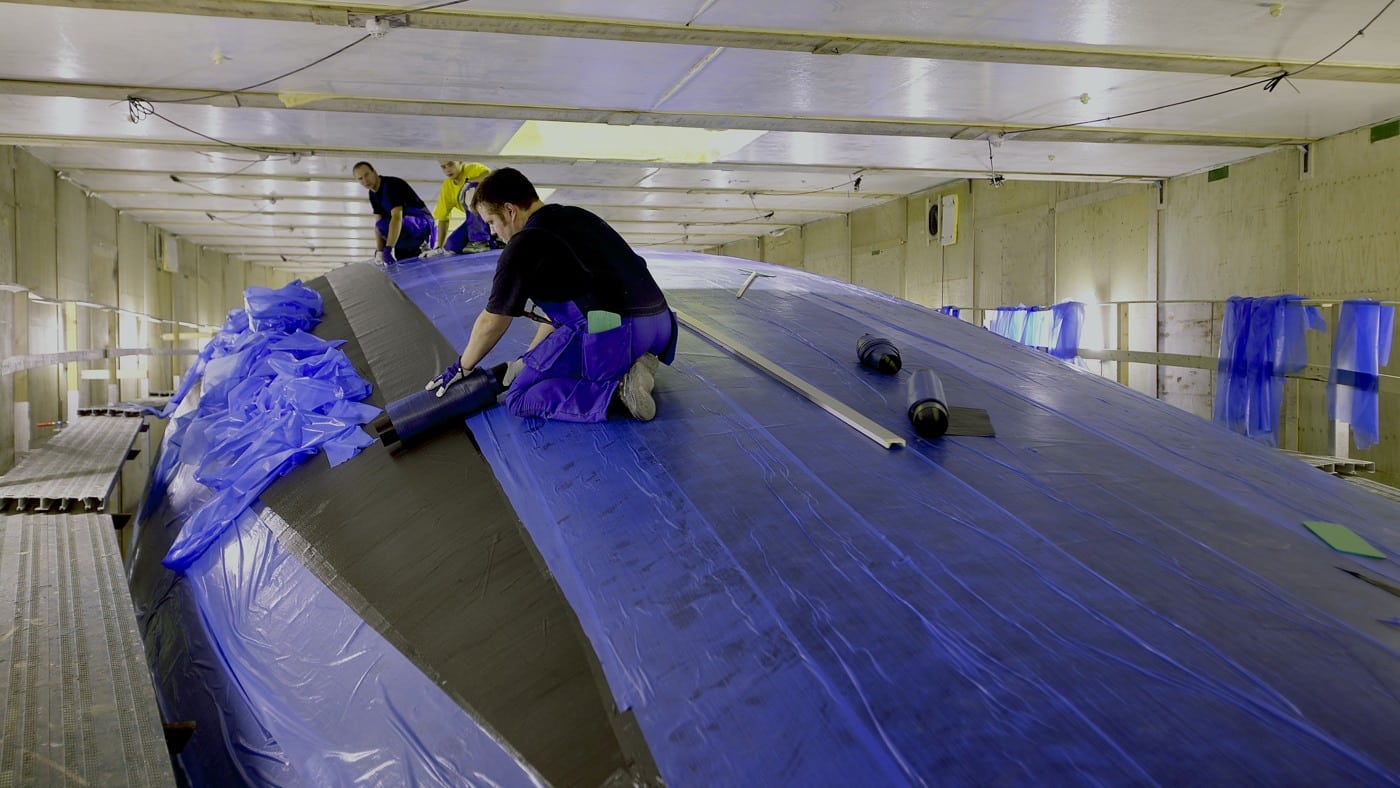 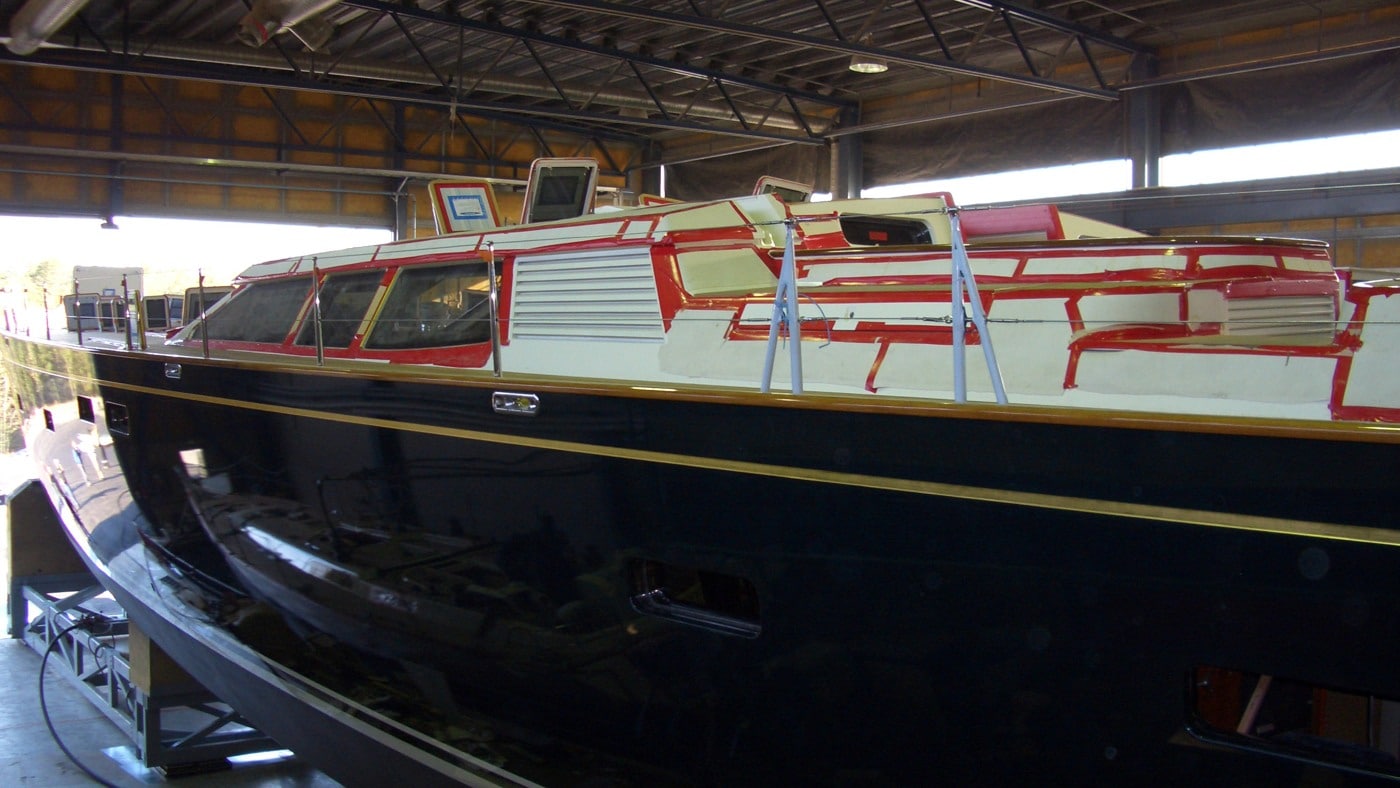 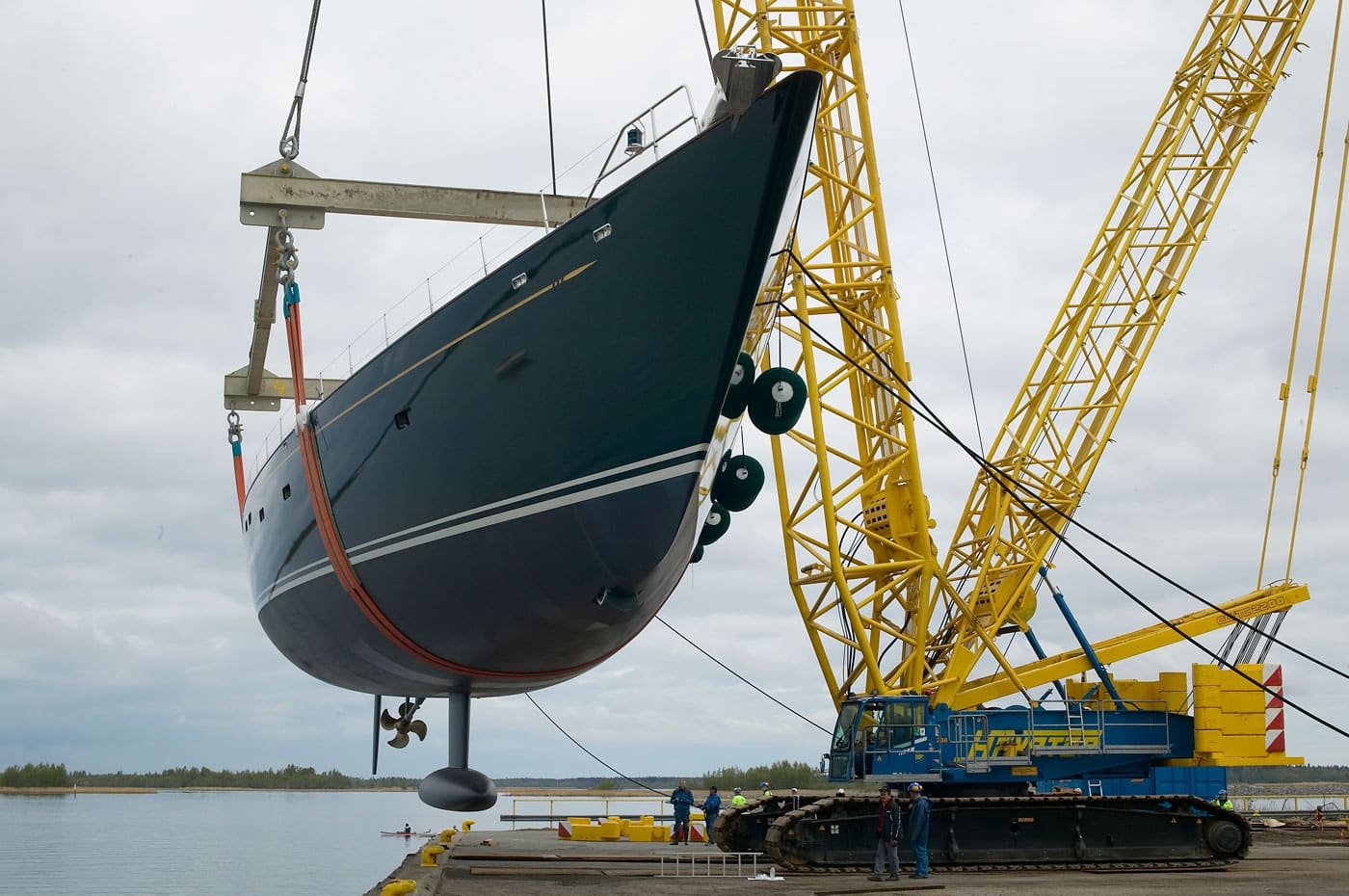 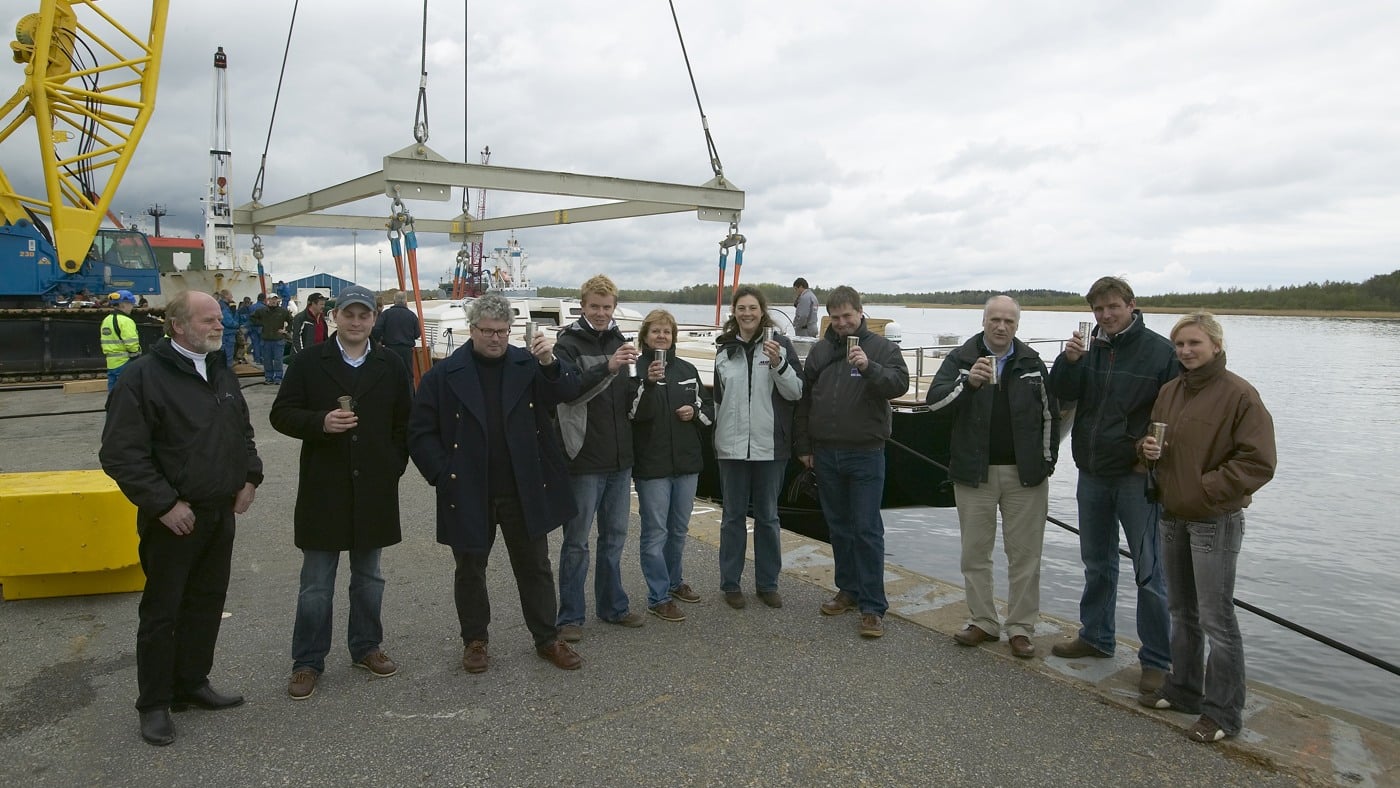 The whole team, at launching, enjoying the results of 3+ years intensive work. 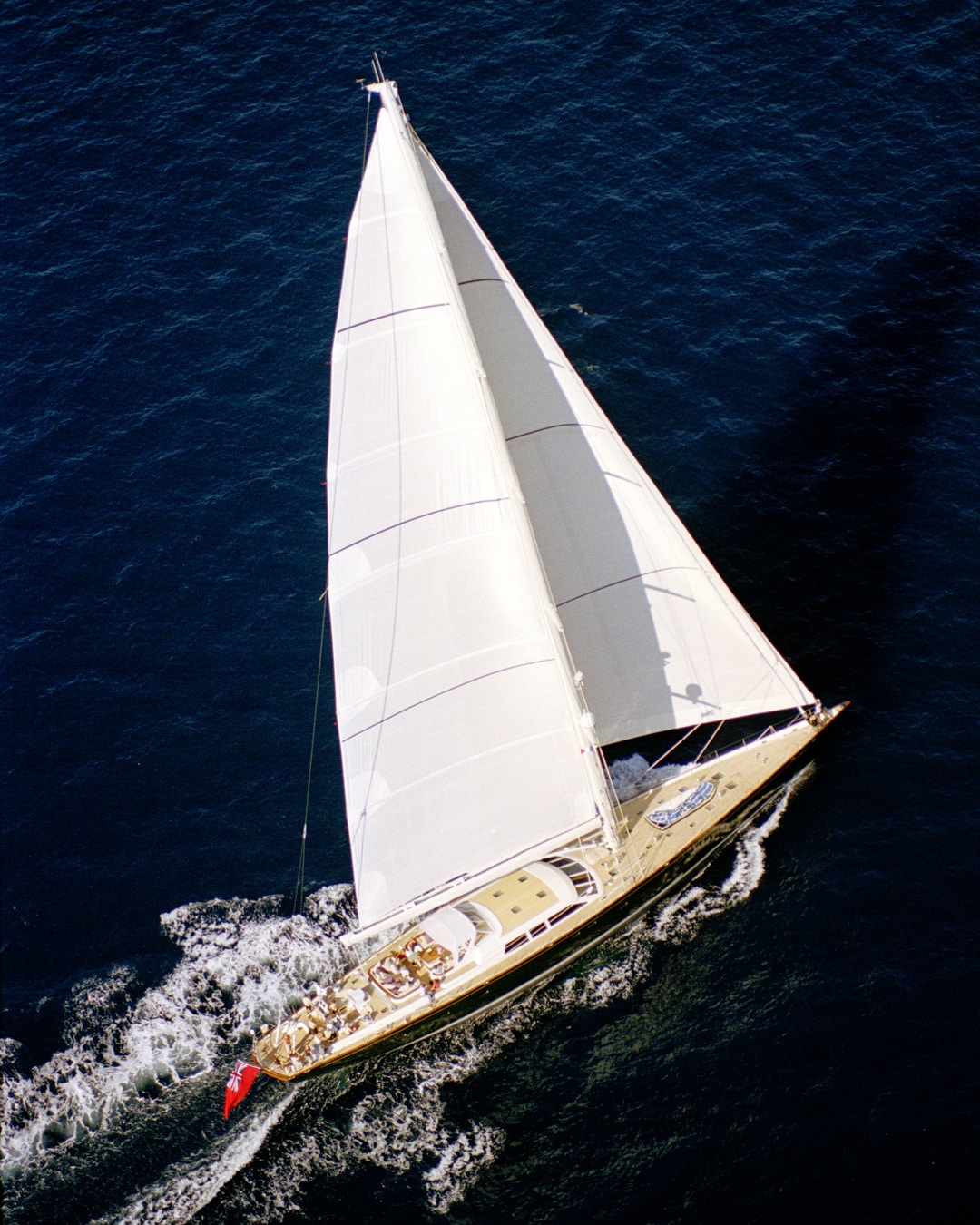 The 152 Pin Gin was launched and delivered in the port of Jakobstad, summer 2006. The owner, Professor Näder invited all Baltic Yachts employees, including their families, to a very generous launching party. A very memorable project had been completed.

Since then, the yacht has sailed around the world, visiting many nice places, and giving Baltic Yachts great visibility and PR.

Needless to say, Pink Gin has played a vital part in the development of Baltic Yachts. Professor Näder is today the owner and Henry Hawkins hold the Executive Vice President position in Baltic Yachts.

One of the interesting things with building custom projects like this is that there is a continuous development process going on. Owners are often intensively involved in creating their dreams and design, concept, equipment will be tuned, and changes will take place. Sometimes causing headaches for the yard sometimes challenging the yard and/or sometimes give very interesting experiences. Many of those things took place during The Pink Gin process.

One interesting thing that happened was the development of a special custom made (to say the least) dinghy. Originally the yacht was planned for a standard type of dinghy and since the yacht did not have a stern dinghy garage the was a recess in the foredeck for its storage.

Halfway through the production we got a telephone call from the owner. He was asking for a drawing showing the dimensions of the dinghy recess. He had plans to have a special amphibius vehicle designed and built that would fit into this recess. The idea was to create something that could do 30 knots on the water and 120 km on the highway. A very different project and a lot of technical challenges. The project was named Tonic.

We were not involved in detail in the development so this challenge was taken by a Swiss engineer Peter Kägi and a Swiss manufacturer  Esoro. 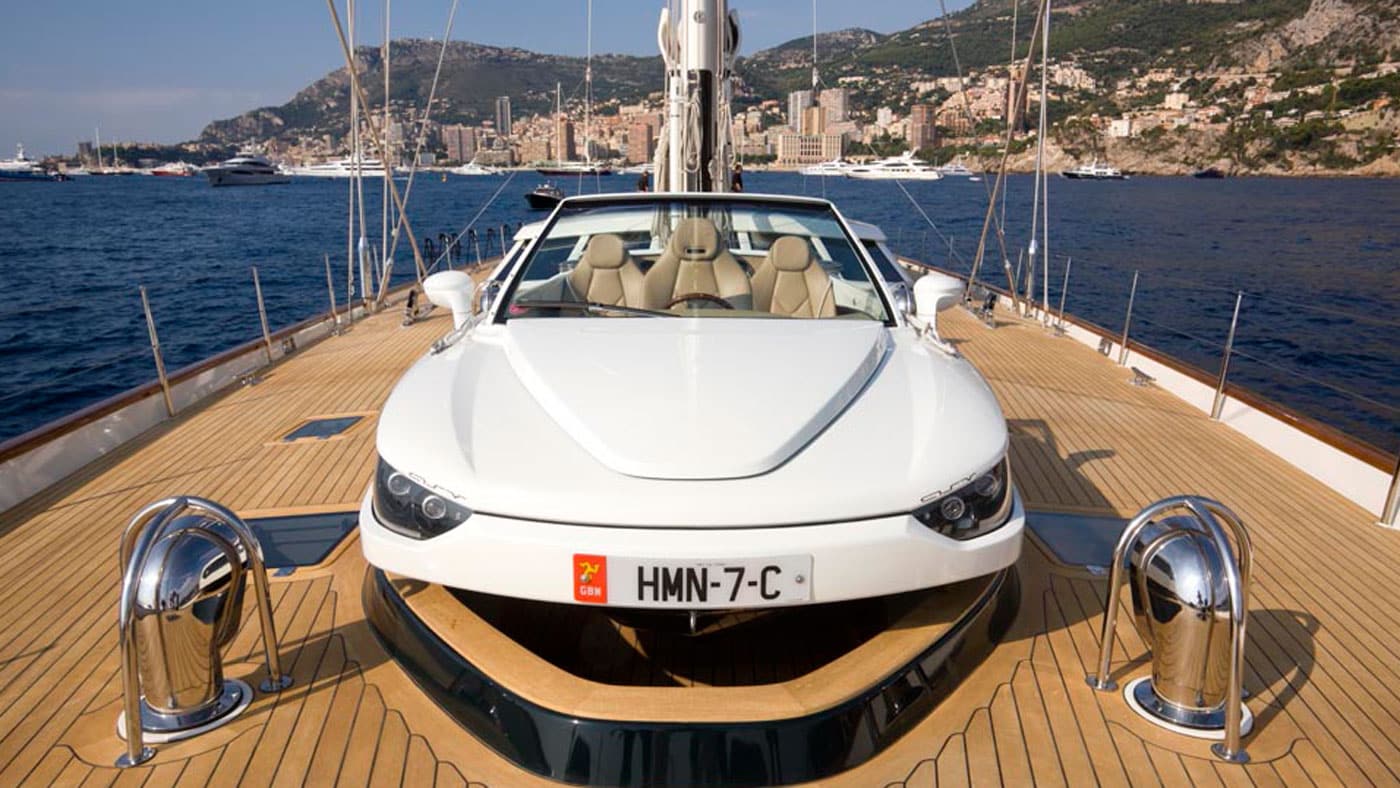 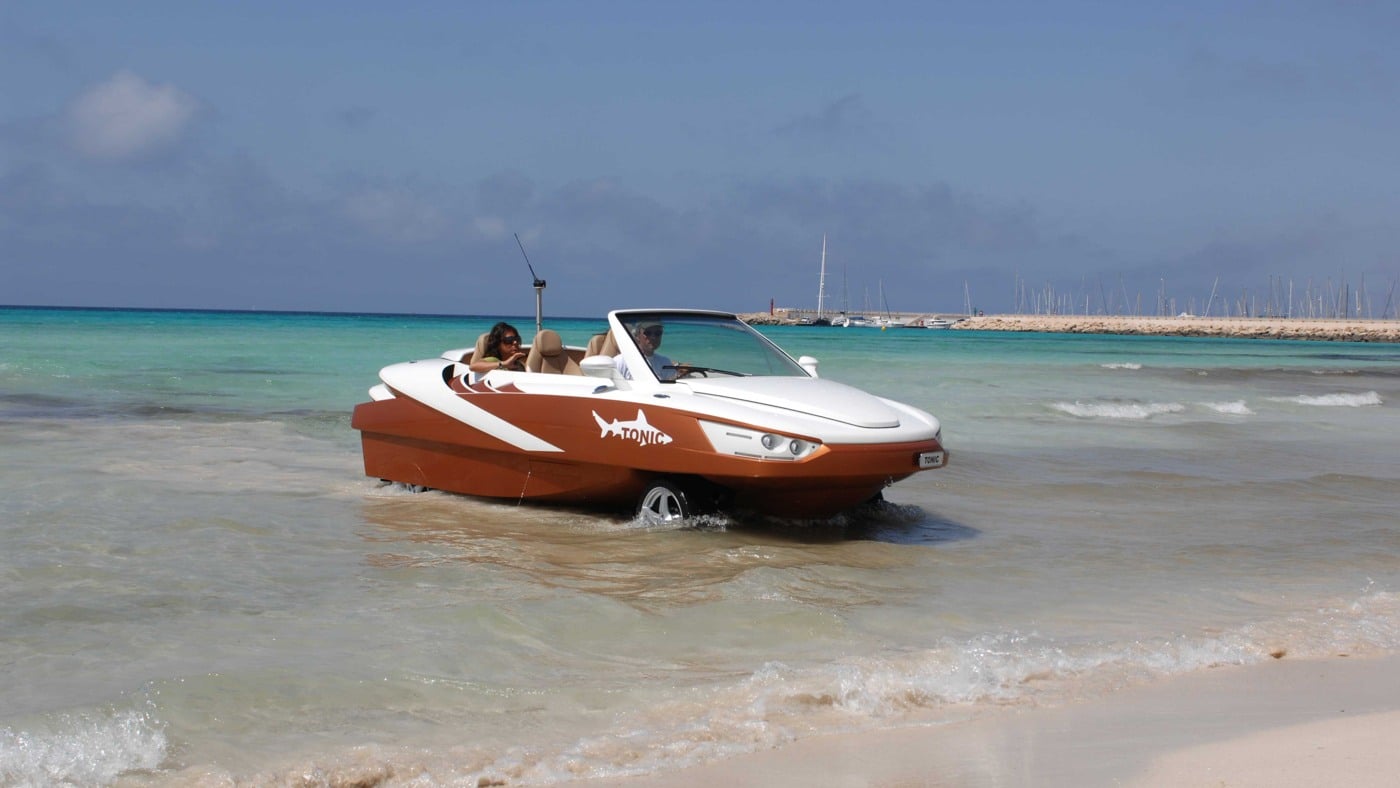 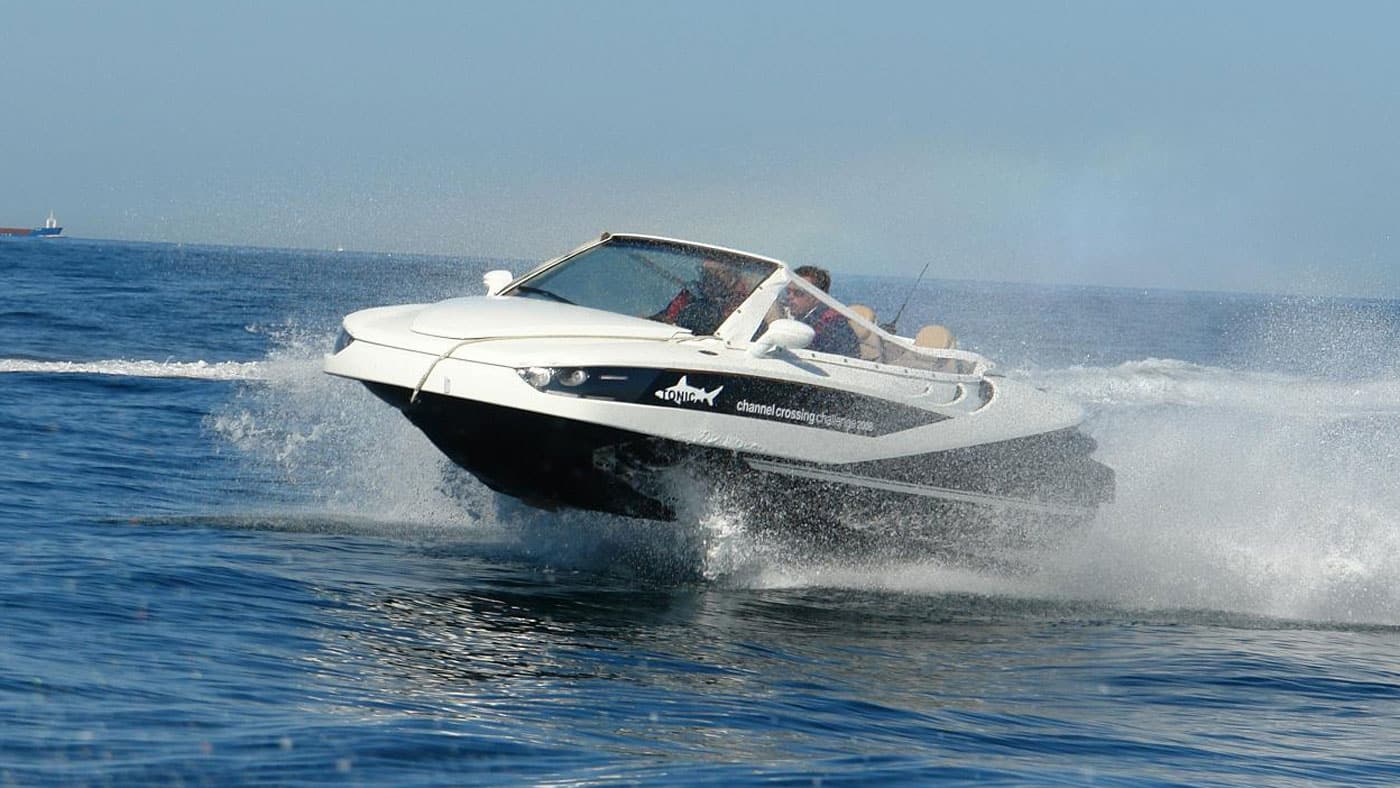 Baltic Yachts was not involved that much in the development of Tonic but as with many other situations in life there was technical lessons learned and benefits also for Baltic Yachts, as spin-off from this project. We later had close cooperation in the development of, for example, the force feed-back steering system developed for larger yachts. This was done in cooperation with the Tonic engineer Peter Kägi.

This is not the end of the Pink Gin story. As many of you know todays Pink Gin is a 175 foot and many other related projects have taken place. However most of these projects happened after that I personally withdraw from the daily activities so I am probably not the person to tell these stories.

Nice projects that gave interesting challenges, valuable life experience and appraised memories to an ex-boatbuilder like me. 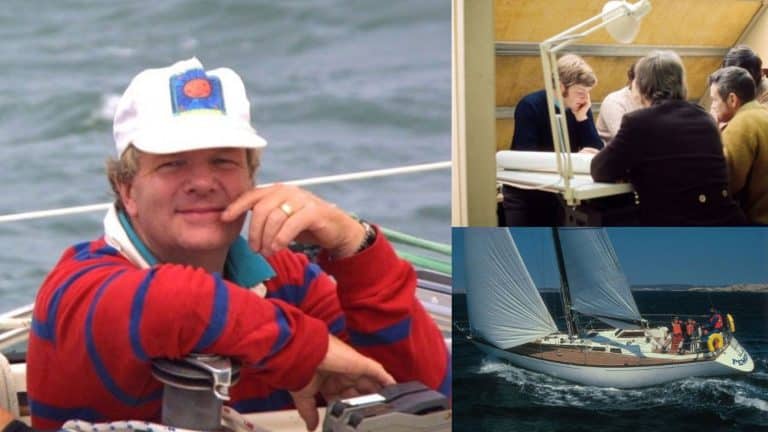 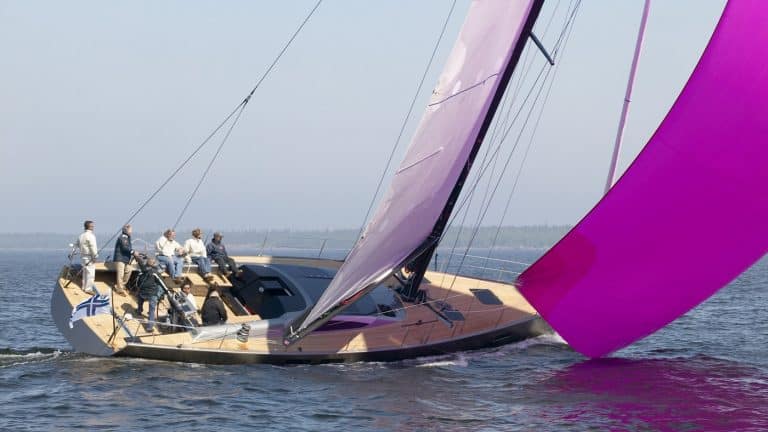 TELL TALES: NEXT STEP IN THE PINK GIN SAGA

In one of my earlier Tell Tales I covered the first Pink Gin we were involved in...