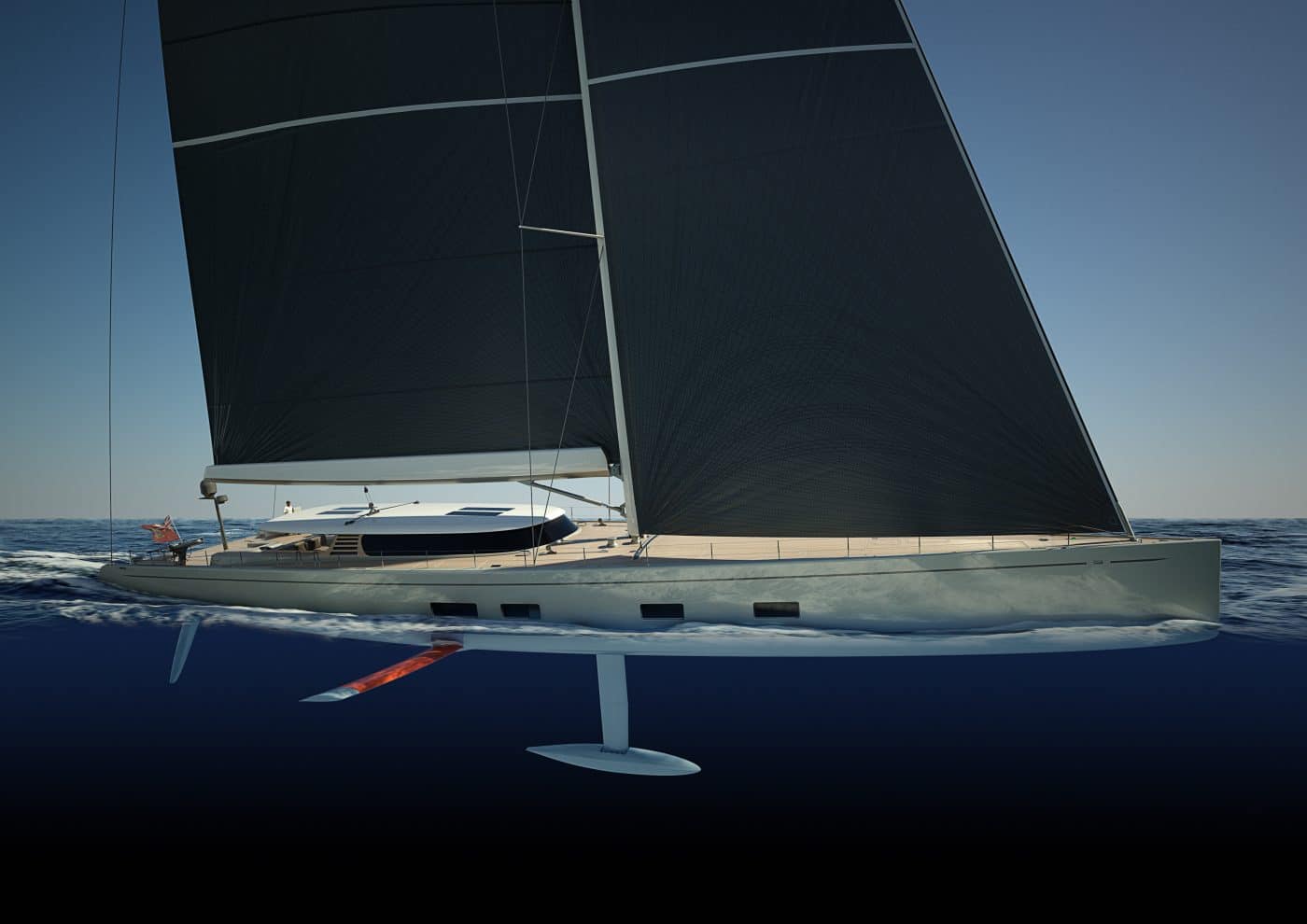 With the casing for the Baltic 142’s Dynamic Stability System foil now installed, the much anticipated launch of the most significant superyacht of 2019 is on schedule for the spring.

The high performance world cruising yacht, with naval architecture by Farr Yacht Design, is the first superyacht to take advantage of the now well-proven Dynamic Stability System (DSS) which, at the touch of a button, can deploy a 29ft 6in long athwartships foil to dramatically reduce heel, boost speed and increase comfort by reducing pitching motion.

Designing and fitting the athwartships case, through which the foil will move, has been a major engineering challenge for Baltic Yachts, Farr and composite engineering experts Gurit, not least because the carbon structure runs directly beneath the owner’s berth amidships.

“Everything is optimised around the foil casing and the support structure,” said Baltic Yachts’ project manager Sören Jansson.

He said that tolerances have been minimised to almost nothing to enable the foil case to be installed beneath the owner’s berth and at the same time allow generous headroom in the cabin.

The foil itself is designed to be deployed while the yacht is sailing at speed, so it runs on four sets of highly specialised bearings designed by America’s Cup engineers at BAR Technologies who are currently working on Ben Ainslie’s 2021 Cup campaign.

To cope with the size of the foil and the projected 140 tonne upward load on the leeward bearings when it is being deployed, an electric Harken captive winch, with a pull capacity of 20 tonnes, will shortly be installed. This will make the operation of the DSS foil a safe, press-button process no matter what the conditions.

A dummy foil, manufactured by French composite specialists ISOTOP, has been successfully trialled in the casing and the DSS foil proper is due to arrive at the beginning of next year. Gordon Kay of Infiniti Yachts said:

“Having installed DSS in dozens of yachts we can confidently say we have reached another level with the impeccable installation of the foil case in the Baltic 142 Canova”.

“With ISOTOP, BAR and the team at Baltic Yachts the installation is nothing short of a work of art. The technical know-how of Baltic Yachts and the Infiniti team have turned a complex process into a simple end-user experience and we will reap the rewards of this collaboration when the yacht launches in the spring,” added Kay.

“The predicted performance numbers are remarkable with the boat able to comfortably achieve boat speeds equal to wind speed in moderate to strong conditions.

“For a conventional boat of these dimensions we would anticipate heel angles of 20-25 degrees, but in this case with the foil deployed we see optimal heel angles in the 7-15 degree range,” he added.

“One of the less understood impacts is the additional pitch and heave damping the foil provides, significantly improving motion and making for a more comfortable ride,” said Britton.

In terms of sheer speed Gordon Kay predicts the 160-tonne (loaded) yacht could reach 25 knots in flat water in 25 knots of true wind.

Almost all the yacht’s accommodation modules have been installed as have the machinery room components including the diesel electric propulsion system and the pull propeller ‘pod’. Kim Kolam, Senior Electrical Engineer at Baltic Yachts explained how the propeller rotates through 340 degrees to avoid having to install a separate stern thruster.

Twin generators and the large Lithium ion battery bank, which supply the yacht with all its electrical needs and enable to yacht to run for long periods of time in ‘quiet’ ship mode, are also in place.

“These just have to be linked with their cabling and piping for final testing,” said Sören Jansson.

He also reports that the deck and complex superstructure are in place and bonded to the hull. The superstructure, which forms the deck saloon, extends as a solid bimini over the cockpit and takes the 24-tonne mainsheet load, is faired and painted. “It’s looking very good!” said Sören.

This exceptional bluewater cruising yacht will launch in the spring of 2019 and be delivered to her owner in the summer when we expect the eyes of the yachting world to be focused on Baltic Yachts.