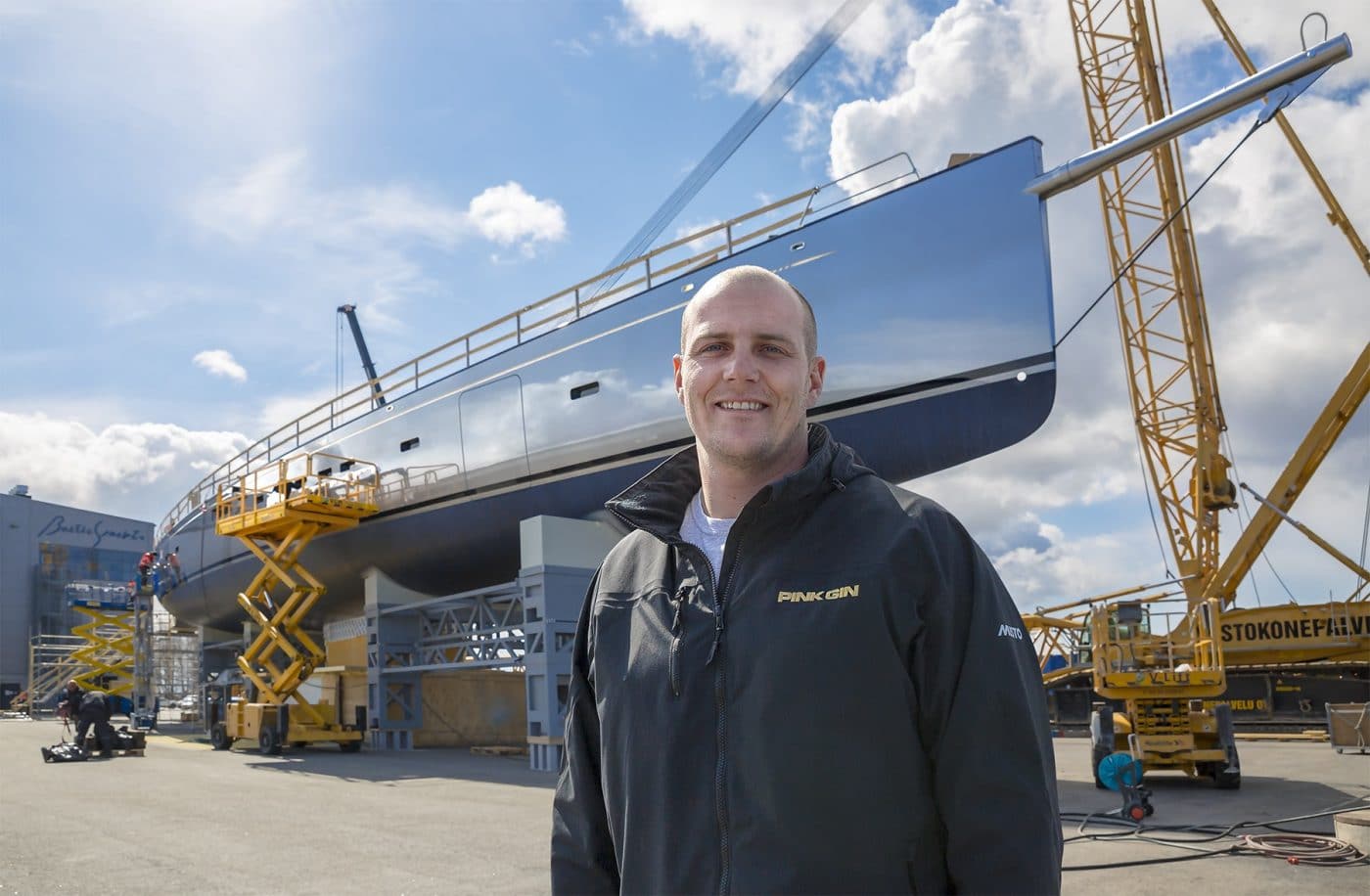 South African Dale left home for a year in 2006. “It’s been a very long year,” he says as he now takes up the challenge of chief engineer aboard Pink Gin V1.

When the Baltic 175 Pink Gin VI  leaves the dock in Jakobstad this summer for the first time, the man responsible for keeping the plethora of systems running aboard the world’s biggest carbon fibre sloop will be 31-year-old South African Dale Kruger.

Self-taught engineer Dale has been with the Pink Gin VI programme since moving to Finland in October 2015 so he’s seen almost every piece of equipment being installed and has an intimate knowledge of the yacht’s 1400hp V-12 MAN main engine and her two 90kW Northern Lights generators. The yacht’s enormous machinery room is where the very heartbeat of the yacht must be maintained.

But it’s not just the internal combustion engines he’s overseeing. A complex hydraulics system serving dozens of outlets, a mass of electronic equipment, the electrical supply, plumbing, pumps, sail furling equipment and even the sewage system will come under Dale’s jurisdiction. It will be the biggest challenge in his superyachting career to date.

Dale was born and grew up in Matatiele a town deep in East Africa’s beautiful countryside in the foothills of the Southern Drakensberg and a long way from the nearest sea, the Indian Ocean. His father, an engineer, ran an automobile workshop, something that would stand Dale in good stead later in life. When he did manage to get to the coast he spent a lot of time fishing and sailing with friends. When the time came for university he headed for Cape Town to study for a business degree.

It didn’t work out and his father suggested he took time out to think about his future. On South Africa’s west coast he came across a sailing school once run by Sunsail and got involved. Not long afterwards he decided to head north to Palma Mallorca for a year.

“It’s been a long year,” said Dale, who hasn’t looked back!

His first job was helping out in the engine room of the 60m motor yacht Aviva, but when his visa ran out he returned to South Africa to join a 42ft Robertson and Caine catamaran with some friends who delivered her to St Lucia. “I learned a lot as it took 36 days,” recalled Dale.

He then travelled to the USA where he worked on a 62m motor yacht as an deck/engineer before joining the iconic Herreshoff schooner Mariette of 1915 aboard which he looked after the yacht’s twin Caterpillar diesel engines. “They were old, had no electrics and were absolutely awesome!” said Dale who joined in the Caribbean and crossed the Atlantic to the Mediterranean.

While he was there he met his girlfriend Monica, now his wife, who invited him aboard Pink Gin V where she was a stewardess for skipper Henry Hawkins.  She had left Finland with Pink Gin V when she was first launched.

“When I saw the advances in big sail boats, the engineering, PLC technology, sensors and all that, I realised I needed to get ahead,” said Dale who left Mariette and joined Pink Gin V in 2008.

Enjoying his time with Pink Gin his move to the new project was a seamless one. Now married with two young children, Savannah, 3 and Valentina, 1,  Dale and his family have settled in Jakobstad. He says Pink Gin VI is well on course for her launch this month and departure from Finland later this summer.

Despite Pink Gin’s size, Dale explained that the design team had specified simple systems along the lines of the last Pink Gin so that the crew would be familiar with them. Normally a yacht of this size would employ an engineer and an Electronic Technical Officer (ETO), but the team have decided to employ two experienced engineers on rotation, working eight weeks on and eight weeks off.

So Nick Wilton from the UK will share the considerable engineering duties with Dale so that both of them can spend time at home on a regular basis. Dale sees it as the ideal balance and is relishing Pink Gin VI’s maiden voyage and leaving the dock in Jakobstad for the first time this summer.